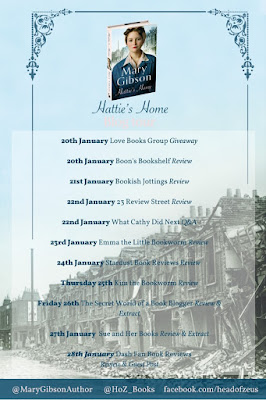 I have been meaning to read a Mary Gibson book since I bought "Custard Tarts and Broken Hearts" many boons ago, but as usual, life gets in the way and I as yet, haven't got round to reading it! But when I saw that there was a new book coming out I desperately wanted to be a part of the Blog Tour, so here we are and my review for the wonderful Hattie's Home is below. If you love family/wartime sagas (as I do) then you are in for a real treat!

Review
When Hattie is begged by her Mum Cissy to come home from the Army after the war has ended as she is nearly blind and can’t live without her, Hattie worries that her Mum is really poorly, but on returning to her beloved Bermondsey in South East London, she realises that not only has London be ravaged by war, but that her Mum is exaggerating about her blindness and very much so! In fact, it doesn’t stop Cissy having the ever caring Mario in tow, leaving Hattie to have to camp on the sofa whilst listening to her Mum and Mario’s antics in the next room!

Hattie and Cissy have never really had what you would call a close mother and daughter relationship. In fact, Hattie would have rather stayed in Belgium with the Army than go home to her mother. At least she would have been fed and not have to live in such dire conditions in Bermondsey.

Clara is also a local Bermondsey girl who fell in love with Barry through rose tinted glasses. He whirled her off her feet and married her only to take her to his birthplace in aboriginal Australia and for her to find out that he was already married. Left with a "brown" baby in a country where she knew nobody, Clara escapes on a ship back to England and on the doorstep of her parents with only the clothes she stood up in and her beloved Martha. Will her parents welcome her back into the fold with open arms, or will the shame on their family be too much for them to bear?

Lou has just given birth to a baby girl, but is so traumatised by the death of another of her children, Sue, that she just isn’t in her right mind and takes the agonising decision to give the baby away, much to the disgust of her son Ronnie, who is the local tearaway.

Hattie, Clara and Lou are all trying to keep the wolf from the door and so look for work at the notorious Alaska Building in Bermondsey, which deals with fur coats and all different types of clothing. It is mundane work, but work is work and if you need to feed yourself after the devastating effects of the war, there doesn’t seem to be much choice.

When Hattie comes across some ex Army huts that are disused, she sets about setting up a committee to get them renovated so that she can live in peace away from Cissy and Mario and also set up homes for other people who have nowhere else to go. This plan would have gone swimmingly if it wasn’t for the local gangster family, the Harpers, who want to muscle in on the scheme to make some money out of other people’s misfortunes. Hattie knows only too well what happens if you cross the Harpers and Lenny, in particular, is in no mood for compromise!

This is the first book I have read by this author, but I do have copies of her other books to read on my bookshelf and it won’t be long before I make a start on them as I love reading about post war London and especially as I come from South East London (where this book is based), I knew all of the places that were mentioned!

The attention to detail with the descriptions of the area and wartime references were excellent and obviously a lot of research had gone into the writing of this book.

Thoroughly enjoyable book and a must read for any fans of wartime/family sagas.