The One Saving Grace by Julie Houston **** 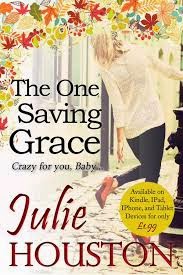 Lowering her voice so that the three police officers couldn’t hear, Grace whispered, ‘Harriet, could you just moan a bit more like that? You know, pretend you’re in labour as opposed to being in lust, otherwise I’m going to end up with a damned great parking fine…’

Sypnosis
So begins a year of madness for Harriet as she goes into labour in Harvey Nichols’ men’s knicker department at exactly the same moment she sets eyes on Alex Hamilton.

Grace, giving birth only two months after Harriet, has her own craziness to contend with and, as both women hurtle down totally unexpected and very different paths, they flounder in a maelstrom of passion and confusion, perilously clinging on as the chain of events threatens not only their comfortable, ordinary lives but also their very existence…

Julie Houston is Yorkshire born and bred. She lives in Huddersfield where her novels are set and her only claims to fame are that she taught at ‘Bridget Jones’ author Helen Fielding’s old school, her neighbour is ‘Chocolat’ author Joanne Harris and her friend is about to marry Tracy Emin’s cousin! Oh, and she was rescued by Frank Bough when, many years ago, she was ‘working as a waitress in a cocktail bar’ at the Kensington Hilton in London.

After University, where she studied Education and English

Literature, she taught for many years as a junior school teacher. As a newly qualified teacher, broke and paying off her first mortgage, she would spend every long summer holiday working on different Kibbutzim in Israel. After teaching for a few years she decided to go to New Zealand to work and taught in Auckland for a year before coming back to this country.

She now teaches part time, and still loves the buzz of teaching junior-aged children. She has been a magistrate for the last thirteen years, and, when not distracted by ebay, geneology (so time consuming but so interesting - she recently discovered her husband is descended from the poet Shelley and the Duke of Milan!!) and crosswords, she spends much of her time writing.

I was asked a while ago to review this book and am so glad I finally got around to it. Unfortunately I didn’t read her first book Goodness, Grace and Me but wish I had as I would have got to know the characters in this book a bit more first, although I was able to follow who the characters were, it would have been nice to already know who was married to who etc!!

Harriet, who is the main character, is married to Nick and has a best friend called Grace. They have both recently had babies (Harriet having twins) but what I loved about this book is that the author deals with the serious subject of Post Natal Depression in a serious, but also very, very funny way.

There were a few laugh out loud moments in the book and don’t want to give anything away, but when Harriet falls whilst getting out of the bath and injures her nether regions make me actually LOL!! Also naming the “Ducks” was another funny moment!

I really liked the character of Harriet, but can’t help feeling disappointed in her, but I guess that’s the point of a good author is that you can like/dislike a character and they somehow feel real!

I will definitely read more of Julie Houston’s books and will hopefully read her first one (wouldn’t be the first time I have read books in the wrong order!). She is also a lovely person to know on Facebook and Twitter as she always  replies to your tweets etc! And the fact that she mentioned one of my favourite programmes The Peaky Blinders made it even better!!

For me, the only reason why I didn’t give this book 5 stars is because I felt there were a bit too many characters and had to check sometimes who was who, but apart from that a great read and some real laugh out loud moments along with some very serious and, at times, sad moments. Well done Julie2!!

Exclusive first look at "The Girl who Wouldn't Die" 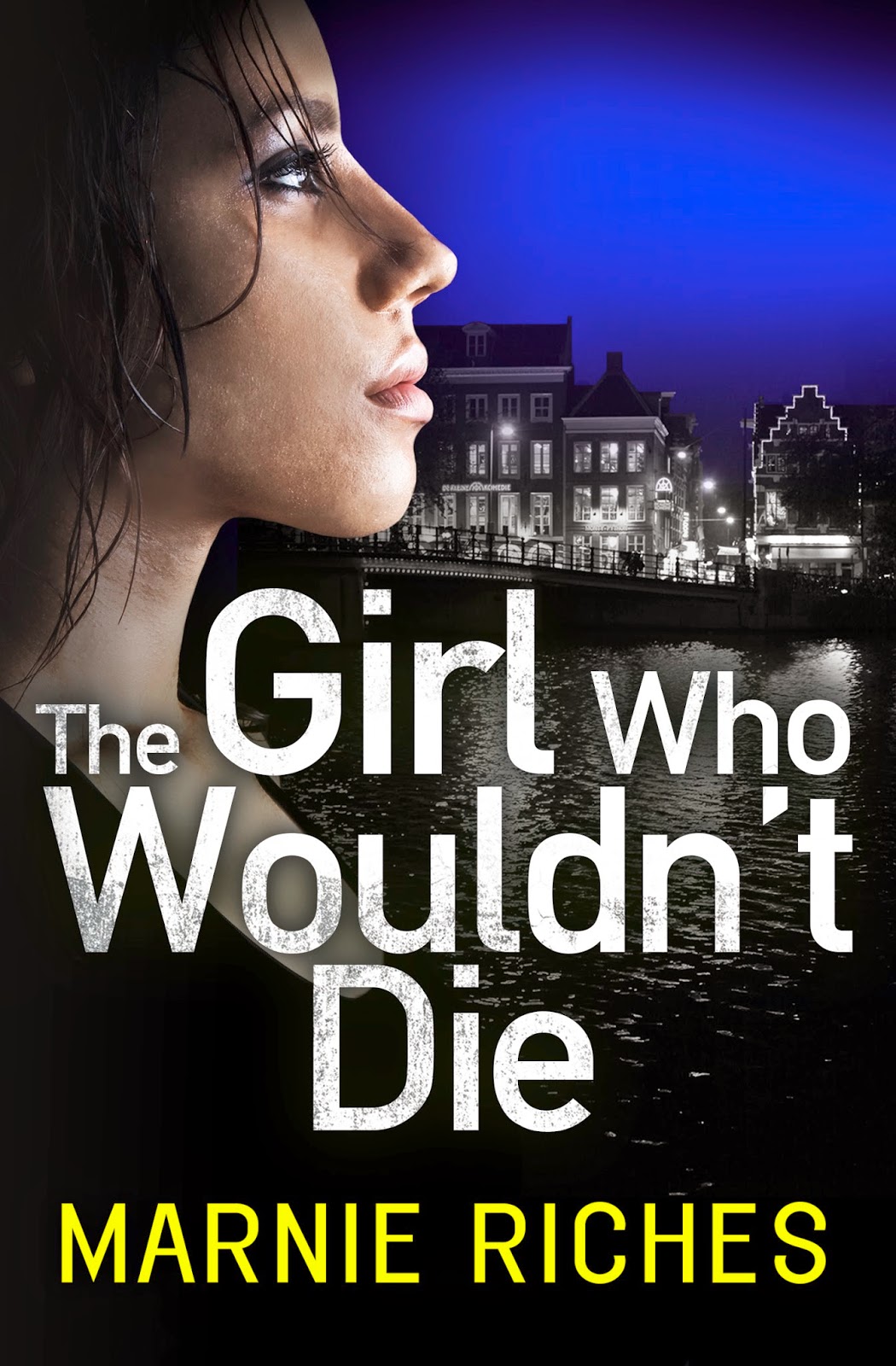 I'm very excited to be chosen to show you the first look at the cover of "The Girl who Wouldn't Die" by Marnie Riches. Hopefully a blog tour to follow! but here is a synopsis of the book and more about the author:

The Girl Who Wouldn’t Die

When a bomb explodes at the University of Amsterdam, aspiring criminologist Georgina McKenzie is asked by the police to help flush out the killer. But the bomb is part of a much bigger, more sinister plot that will have the entire city quaking in fear.
And the killer has a very special part for George to play…
A thrilling race against time with a heroine you’ll be rooting for, this book will keep you up all night!
Marnie Riches grew up on a rough estate in Manchester, aptly within sight of the dreaming spires of Strangeways prison. Able to speak five different languages, she gained a Master’s degree in Modern & Medieval Dutch and German from Cambridge University. She has been a punk, a trainee rock star, a pretend artist, a property developer and professional fundraiser. In her spare time, she likes to run, mainly to offset the wine and fine food she consumes with great enthusiasm.

The Girl on The Train by Paula Hawkins ****

The Girl on The Train by Paula Hawkins ****

About the author
Paula Hawkins worked as a journalist for fifteen years before turning her hand to fiction. Born and brought up in Zimbabwe, Paula moved to London in 1989 and has lived there ever since. The Girl on the Train is her first thriller.

Sypnosis
'Gripping, enthralling - a top-notch thriller and a compulsive read' S J WATSON, bestselling author of Before I Go To Sleep
Rachel catches the same commuter train every morning. She knows it will wait at the same signal each time, overlooking a row of back gardens. She’s even started to feel like she knows the people who live in one of the houses. ‘Jess and Jason’, she calls them. Their life – as she sees it – is perfect. If only Rachel could be that happy.
And then she sees something shocking. It’s only a minute until the train moves on, but it’s enough.
Now everything’s changed. Now Rachel has a chance to become a part of the lives she’s only watched from afar.
Now they’ll see; she’s much more than just the girl on the train…

Review – No spoilers!!
After all the hype about this book I couldn’t wait to start it as have heard nothing but good reviews about it! It started off fine and I quickly got into it and read a quarter of the book in one go! It was after this that I found it to be a bit repetitive . The chapters go from one character to the other (Rachel being the main character, Anna and Megan). The chapters then go to the different characters but tell you the same story, therefore being quite repetitive and I found myself having to look several times to see which character I was reading about.


I found Rachel to be an interesting character. I actually felt sorry for her as she slipped into alcoholism due to the break up of her marriage and the effects this had on her day to day life. It was quite scary reading about how she had bouts of total blackness through drink and it was good how the author wrote about her trying (almost too hard at times) to remember things that had happened in the past.
I actually did read some of this book on the train and found several people looking at me whilst I was reading it! So I am glad I read it and can imagine it being a film (which I would definitely go and see!).
The ending was very good and found myself getting quite anxious to read the very last pages to find out what happened! All in all, a good thriller and would definitely read another book of Paula’s!!
Posted by Unknown at 21:29 2 comments: