The Geography of Friendship
by
Sally Piper
BLOG TOUR 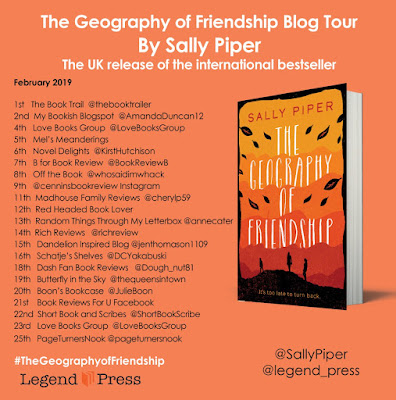 Extract
SAMANTHA WALKS WITH A KIND OF idleness with intent; daydreaming in motion. She swings one leg in front of the other like a pendulum, foot hitting ground, heel, toe. Some steps fall short, others long; some light, others heavy. Her feet are small, but they have a nose for their own balance.
The rest of her is large, but out here it doesn’t matter. Because everything around her is large too. Especially the mountains. They are grand and permanent. The wide-girthed eucalypts that travel up their flanks are slick-barked and gnarled. Their limbs reach up and stab silver lines into the blue sky.
When Samantha passed through here as a younger woman she’d wanted to know how it all worked, how the land and sky and flora and fauna were connected and dependent and in tune. She’d wanted to understand their symbiosis as if knowing meant she had something to contribute, something worthwhile to add to the landscape. Now, in her forties, she knows better: not everything can or need be understood, and there is no relevance to her being here. She has nothing to offer this place beyond her attention. And for once she’s content with her insignificance.
Last time Samantha was here she’d fluctuated between fear and inadequacy. This time it’s mostly inadequacy. She barely noticed any of the beauty around her previously. She’d felt too threatened, looking behind her as much as in front, always trying to see the hidden. She tripped and stumbled, in both character and feet. Beneath her backpack her skin had chafed and pilled with sweat and friction. She’d felt vulnerable every time she put that bloody thing on, knowing she couldn’t run with it, and again every time she took it off to make camp. Night brought another set of worries.
Now she feels no such threat or vulnerability, though the terrain remains brutish in parts and her backpack – modern and lightweight in comparison to the one she’d worn years earlier – is still heavy with gear. But it wasn’t the terrain she’d feared, or even the restrictions of her pack. She’d feared him.
Samantha looks up from her feet and takes in the surrounding forest once more. Eucalypts mostly. Little has changed about the nature of these trees in the last twenty or so years. They still shed dreadlocks of bark and their silvery-green leaves still talk in the breeze. Their branches tick and creak and birds still perch along them, observing more than chattering now that the day is long past dawn. Everything and nothing is as she remembers it.
What is the same, though, is that once again she’s following not leading.
Nicole walks in front, just as she had before. And Lisa is in the middle.
They haven’t seen each other for years, but here they are, falling into the same old pattern as though there’s no other worth considering. Maybe it’s more to do with the place they’re walking through. Maybe the land has designs on them – maybe it always had – robbing them of the power to choose alternatives.
But Samantha’s never been much good at free will. If she were, she wouldn’t even be here.
No introduction had been necessary when Lisa had called her, even though they hadn’t heard from one another for over twenty years. Samantha would recognise the authority in Lisa’s voice anywhere.
‘Samantha. I need to see you.’
The significance of the call had sat peculiarly with the banality of what Samantha was doing at the time – at the sink scrubbing the burnt bottom of a pot she’d used to cook bolognaise sauce. She’d
seen No Caller ID displayed on her phone’s screen but accepted the call with a sudsy finger anyway. She always does. She remembers the casual way she pressed the mobile against her ear with her shoulder so she could keep working at the pot as she talked, as though it might be her mother’s daily call. But on hearing Lisa’s voice, that complacency left her. Her hands stalled in the sudsy water and her neck, cricked to one side, tensed.
Posted by Boon's Bookcase at 06:30 No comments:

It's my turn to host the Blog Tour for One Minute Later by Susan Lewis and my lovely friend and guest reviewer, Julie Williams has reviewed this one for you. She loves this author's books and I'm sure this one doesn't disappoint! 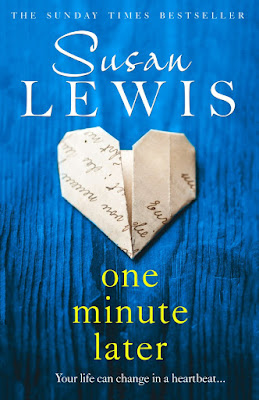 One Minute Later is a great story telling the tale of two strong female character’s in different time lines who are brought together to share their own personal heartaches and loves.

Vivienne Shager lives a vibrant life to the full in fast paced London but then on her 27th birthday her life is turned upside down as tragedy strikes leaving her in need of a donor heart to give her any quality of life. We learn all the emotions that this entails while discovering how this affects Vivi.

No longer able to live independently, she retreats back to the family home to her Mum and we then discover what a turbulent relationship they have.

Fate however, brings love and friendship which gives her the courage to fight for her life.

Shelly’s story is so different as she lives surrounded by lots of loved family members who all seem to get on with each other while leading good lives. Shelly adores Deerwood Farm where they all live and I really got a good homely feel to this place even though I discovered the tragedy that took place here.

As the lives of Vivi and Shelley merge, secrets and lies are uncovered bringing peace and understanding to these well written characters.

I particularly enjoyed reading about organ donation and thought it was well researched and written and hope this inspires people to go on the register as lives are precious with no better gift than extending a life.

My thanks to Net Galley and Harper Collins for the ARC digital copy and to Julie for the chance to guest review on her blog.
Posted by Boon's Bookcase at 06:30 No comments: