Today, i'm delighted to be hosting the Blog Tour for The Secret Wife by Gill Paul. I loved the author's previous novel No Place for a Lady and am nearly finished this one, so stay tuned for my review shortly! Below is a guest piece from Gill Paul to wet your appetite............ 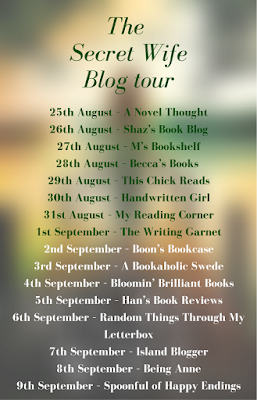 Could the Romanovs have been rescued?


If only JFK had been in a bulletproof limo in Dallas in November 1963. If only von Stauffenberg’s plot to kill Hitler had been successful in July 1944. And amongst history’s other ‘if only’ moments are the various attempts to rescue the Russian royal family in 1917 and 18.


After they were arrested on the 16th of March 1917, the family hoped that they would either be sent into exile in their beloved Livadia Palace on the Crimean coast, or transported to Britain, where Alexandra was closely related to the British royal family (she was a granddaughter of Queen Victoria). Another plan was that they go to Denmark, birthplace of Nicholas’s mother, or perhaps Switzerland, which was neutral in the Great War.


Telegrams began whizzing between European foreign offices as every foreign secretary tried to offload the political headache onto another country. One thing was clear: they had to move quickly because the situation in Russia was volatile. An offer of asylum was sent by Britain on the 23rd March and a plan was drawn up to get the Romanovs to Murmansk, where a British cruiser could collect them. But at that point, King George V got cold feet. Where would they live? Who would subsidise them if they couldn’t get their own money out of Russia? Would his subjects rise up in protest? On 30th March, the offer of asylum was quietly rescinded. It had been their best chance of survival.


In August 1917, the family were moved to Tobolsk in the heart of Siberia. Hundreds of miles from the sea it was going to be much harder to rescue them, but still there were several plans. Two businessmen, Jonas Lied and Henry Armistead, proposed to the British Foreign Secretary that they would whisk the Romanovs out of Russia in James Bond style, using a fast motorboat to take them along the river systems to the ocean. However, this had to wait till spring because Tobolsk’s rivers were frozen throughout the winter months.


In October 1917 Lenin seized power and straight away took a hard line against the erstwhile royals. Alexei, the Tsar’s haemophiliac son, injured himself during the winter and could no longer walk, while Alexandra was mostly bedbound with sciatica, making rescue increasingly problematic. A Russian commissar, Yakovlev, tried to divert a train and get the family to Omsk, a town not yet under Bolshevik control, but this plan was scuppered by militant railway workers.


Instead the Romanovs were taken to Ekaterinburg and placed in the ‘House of Special Purpose’, where they were much more heavily guarded than at any previous accommodation. The net was closing, but still the intrepid Armistead was plotting to get them out in his motorboat. Others had their own schemes but any rescue would have involved a shoot-out with armed guards, which was risky.


Ironically, it was rumours of these rescue attempts, combined with the approach of around 40,000 Czech troops, that forced Lenin’s hand. At around 3am on the 17th of July 1918 the Romanovs were brutally murdered in a dingy basement.


If only George V had been more charitable. If only Henry Armistead had got them out of Tobolsk before winter set in. If only….....