Casting Off
by
P I Paris
Blog Tour

Today, i'm on the final leg of the Blog Tour for Casting Off by P I Paris. I have an extract of Chapter one for you. I haven't had a chance to read this yet, but of the reviews I have read, it sounds a side splitting read! Enjoy Chapter One..... 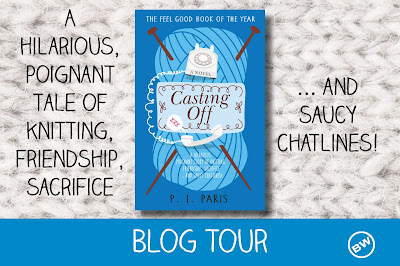 
Mr Ferguson was dead. Miss Ross could tell by the feet. They were sticking out of his bedroom door into the corridor along which she had been walking. One foot, partly covered by a thin, brown sock, was only slightly less repulsive than the other, which was bare and purple, with badly trimmed and not very clean toenails.

She acknowledged her diagnosis was hardly scientific. Even the pathologist in Lewis would have made a brief examination of the body before announcing the victim had been dead for so many hours and minutes. However, the feet looked so lifeless that, well, one reaches an age when you simply know these things.

With no desire to risk seeing other naked, potentially purple bits of the old man, Miss Ross turned around and set off to find a member of staff.

This was the second resident to die in the last few weeks. Soon there would be two new faces in the dining room, staring around in surprise. (Wasn’t it only the other month that they were young?)

The deceased was removed discreetly by Mr Dunn, the local undertaker. It was a sad reflection of their lives that he visited more often than many families, a point not lost on Dorothy, who hadn’t seen her son forever such a long time. The thing was, she never wanted to appear interfering and increasingly waited for Andrew to make contact, while he, in turn, increasingly did not. Everyone seemed so busy these days. Everyone, that is, except those living at We Care For You.

Dorothy felt they shouldn’t complain. You got on with the task ahead, regardless of what fate put in the way. They had had their lives. One had to make room for new generations and as people got older they needed less and less room until . . . there was Mr Dunn.

Of course, this latest departure was the main topic of conversation over lunch. Being the third Tuesday in the month, this was boeuf bourguignon, a description that initially put off several people until they realised it meant meat stew. The cook, brought in recently by the new owners, knew a great deal more about food than she did about elderly folk.

‘Poor Mr Ferguson,’ said Dorothy. ‘Coming upon his body like that must have been a terrible shock, Miss Ross.’

‘I knew he was dead as soon as I saw his sole.’

‘Someone needs to show that new cleaner how to use a Hoover properly.’

‘You would hope so, but she needs to be shown how we use one in Great Britain.’

It was obvious that Dorothy didn’t see. She could be exasperatingly slow on the uptake on occasions. There was no hint of dementia or that sort of thing, not like some in the care home who displayed significantly more than a hint. No, what lay behind those large NHS glasses with their red-tinged frames was more of an . . . innocence.

She could have been an exhibit, plucked straight out of one of the museums of ‘bygone days’ that seem to have sprung up in even the smallest towns. Magically brought to life in her long A-line skirt, blouse and hand-knitted cardigan, Dorothy was a living reminder of an era long gone when things were so much simpler and wholesome. It was partly why there was something so very appealing about her.

‘It’s a sign of the times,’ said Joyce, tucking into a second helping. She was an enigma as regards eating. Without exception the others gradually ate smaller meals, becoming thinner and more frail as the years passed, but Joyce was, to put it bluntly, rather the opposite. ‘I think it’s all part of this dumbing down people keep talking about. Nothing’s the same as it used to be . . . portions in restaurants . . . standards of behaviour . . . Hoovering.’

Miss Ross groaned inwardly, sensing the start of yet another conversation about how the good old days were so much better. She was saved by the appearance of Walter, a pleasant man, someone who would have at one time been referred to as ‘dapper’. He was a completely changed per- son from the sad figure who had arrived eighteen months earlier, broken by the death of his wife of more than forty years.

His lovely niece had made such a huge difference to him over the last three months, visiting every Thursday without fail. She always had time to blether, helping out with little tasks if she could and often staying for most of the day. Yes, an altogether thoroughly nice young woman.

‘Mind if I join you?’ asked Walter.

The women around the table smiled and nodded. In reality he didn’t need their permission at all, but it was polite of him to ask and it made them feel as though they could still make decisions.

‘I wonder who we’ll get to replace him,’ said Deirdre. ‘I hear there’s someone called Joan taking the other empty room.’

Miss Ross didn’t bother asking how she knew, suspect- ing that the information had been obtained during one of her many spying sessions. Deirdre had a habit of stopping to catch her breath in strategic doorways. She was the home’s official source of gossip and its unofficial authority on morals, particularly other people’s.

‘I wish they would do something about that man,’ said Deirdre, her eyes resting on Mr Forsyth, naked as the day he was born eighty-four years earlier. It was not an uncommon sight and the majority of those present simply carried on with their meal. Ben, one of the young male carers, appeared only seconds later with a dressing gown, which he deftly got him into.

‘Here you are, Mr Forsyth. You’ll catch cold without this and that wouldn’t be any good, would it?’

The old man seemed as happy to be with clothes as without and once suitably attired he sat at a table and Ben fetched him something to eat.

There were activities in the home most days, as well as visits by a variety of professionals, from the local hairdresser to the optician, both of whom brought with them an array of portable equipment. That afternoon was the turn of the dentist and the gentleman with his accordion. The former was often known to sing during his sessions and although he didn’t have a great voice he certainly knew more tunes than the latter.

Walter usually retired to his bedroom when this particular musician came. He would pursue one of his favourite hobbies of choosing a famous game of chess between grandmasters of the past and then playing out the moves on his beautiful handmade board. He had lacked an opponent when he’d first rekindled his interest six months earlier. That was before Julie started visiting. Everything in his life had changed dramatically since then. Having a chess partner was only a tiny part of it.

Thank you to Black & White Publishing for sending me a copy of this book to review.