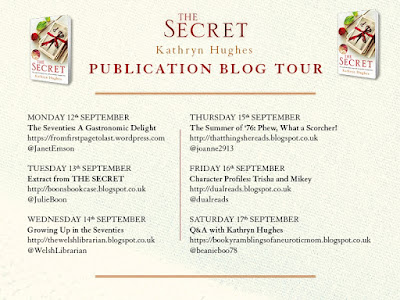 Today, it's my pleasure to be a part of the Blog Tour for The Secret by Kathryn Hughes. Enjoy an extract from the book, so sit back and enjoy.......


EXTRACT FROM CHAPTER ONE

June 1975
She had first married Thomas Roberts in the school playground when she was five years old. The ceremony had been days in the planning, and when the time came she’d worn one of her mother’s net curtains fashioned into a makeshift veil and topped with a halo of daisies, and everybody agreed that she looked just like a real bride. Thomas presented her with a little clutch of hand-picked wild flowers he had collected on his way to school, and they’d stood hand in hand as little Davy Stewart officiated. Davy’s speech was impaired by a crippling stammer, and his jam-jar glasses magnified his eyes to the size of a bush baby’s, but he was a choirboy and the closest thing they had to a vicar.

Mary smiled at the memory as she turned to one side and admired her profile in the full-length mirror. She ran her hand tenderly over the swell of her belly, admiring the way it jutted out from just beneath her breasts and formed a perfect dome. She placed her hands in the small of her back, leaned forward and studied her complexion for any signs that she might be blooming. The bootees she had bought from Woolworths, a neutral lemon colour, lay on the dressing table. She buried her nose in the wool, but without little feet to warm them, they smelled new and sterile. At the sound of her husband clumping up the stairs, she thrust the bootees back in the drawer and just managed to whip out the pillow from under her dress before he opened the bedroom door.

‘There you are, love. What’re you doing up here?’

She bashed the pillow back into shape and laid it on the bed. ‘Nothing, just tidying up a bit.’
‘What, again? Come here.’ He pulled her close, nudged her blond hair to one side and kissed her on the neck.
‘Oh, Thomas, what if I’m not pregnant?’ She tried to keep the whining note out of her voice, but she’d tasted disappointment so many times before that it was becoming difficult to remain positive.

He grabbed her round the waist with both hands and wrestled her on to the bed. ‘Then we’ll just have to keep trying.’ He burrowed his face into her neck, and she detected the familiar lingering smell of coal dust in his hair.

‘Thomas?’
He propped himself up on his elbows and gazed into her face. ‘What?’
‘You will hand your notice in if I am pregnant, won’t you?’
Thomas sighed. ‘If that’s what you want, Mary, yes, I will.’
‘I can’t look after a baby and run the guest house by myself, can I?’ she reasoned.
Thomas gazed at her, a crease of worry lining his forehead. ‘It’ll be tough, though, Mary. I mean, we’ve just had a thirty-five per cent pay increase. It’s a lot to give up, you can’t deny that.’
‘I know, love, but it’s such a dangerous job and you hate the long commute to the pit.’
‘You’re not wrong there,’ he conceded. ‘What time’s your appointment at the doctor’s?’
‘Three.’ She stroked a finger down the side of his cheek. ‘I wish you could come with me.’
He kissed her fingertip. ‘So do I, Mary, but I’ll be thinking of you and we can celebrate when I get home, can’t we?’
‘I hate it when you have to work the night shift.’
‘It’s not exactly a barrel of laughs for me either.’ It was said with a smile that removed any hint of rancour from his words.

As he sat on the bed to pull his boots on, Mary snuggled up beside him. ‘I love you so much, Thomas.’

He reached for her hand and laced his fingers through hers. ‘I love you too, Mary, and I just know you’re going to make a cracking mother.’

Ever since their official wedding night, three years ago, they had been trying for a baby. Mary had not envisaged it being so difficult, and at thirty-one years of age, she was all too aware that time was running out. She was born to be a mother, she knew it, had always known it, and she could not understand why God was punishing her in this way. With each passing month, as the familiar dragging sensation crept into her stomach and the cramps took hold, a little more of her optimism had ebbed away, and her yearning to have a baby had become ever stronger. She was longing to be woken at four in the morning by a screaming infant, would relish having a bucket of terry nappies festering away in the corner of the kitchen. She wanted to look into her baby’s eyes and see the future. Most of all she wanted to see her Thomas with his strong arms tenderly cradling his baby – boy or girl, it didn’t matter – and to hear him being called ‘Daddy’.

She would stare too long at babies in the street and glare at mothers who shouted at their children. She had once pulled out a tissue and wiped the nose of a little kid when his useless mother seemed oblivious to the long candles of snot the child was trying to reach with his tongue. Needless to say, her interference had not been appreciated. Once, on the beach, she’d come across a young boy sitting by the shoreline all alone, taking in the deep, juddering sobs that all children did when they had been crying too much. It turned out he’d dropped his ice cream on the sand after only one lick and his mother was refusing to buy him another. Mary had led him by the hand to the ice cream van and bought him a 99, his beaming face all the thanks she needed.

Her mothering instincts were never far from the surface, and she was becoming more and more desperate to nurture a child of her own – hers and Thomas’s. As she listened to her husband moving round the kitchen downstairs, getting ready for his shift, she prayed that today just might be the day when her dream would start to become a reality.

To order your copy of The Secret click here