The Memories of Us
by
Vanessa Carnevale
BLOG TOUR 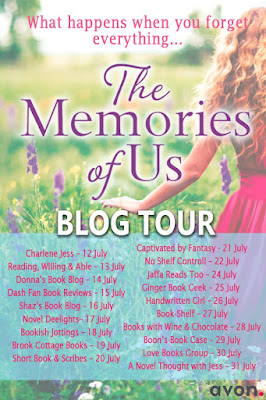 Today, it's my turn on the Blog Tour for The Memories of Us by Vanessa Carnevale and I have an extract for you.

Extract
I spend the next hour circling in and around crowds at the bustling market, and am edging my way towards a stall of fresh produce, trying to call to mind a way to cook the rainbow-coloured stalks of silverbeet, when someone taps me on the shoulder.
‘Fancy seeing you here,’ says Flynn, smiling. He smells of fresh aftershave and is wearing a grey coat and jeans, with a navy rib-knit scarf around his neck. He eyes the vegetables in my basket. ‘Decided to stock the fridge, have we?’
‘How observant.’ I laugh, rolling my eyes. ‘Now I just need to figure out what to do with them.’
‘I could help you with that.’
‘Oh, you definitely seem to be the helping sort,’ I reply with a hint of sarcasm. I pick up a broccoli to admire its tiny yellow flowers before adding it to my basket. I grab a few oranges, some imperfectly shaped carrots, their tops still on, a bunch of kale and some pumpkin. Flynn offers to take the basket for me while I pay for the produce, and when I turn around, a brown-and-white Cavalier King Charles, with long ears he hasn’t grown into, jumps up at me, wagging his tail.
‘Easy, boy,’ says Flynn. ‘Looks like he’s excited to see you.’
‘What’s his name?’ I ask, crouching down to pat him.
‘Parrot.’
‘Parrot?’ I titter, looking up at Flynn as Parrot licks my face. I wipe my cheek with the cuff of my sleeve.
Flynn shrugs. ‘It makes him unforgettable. And he’s also super loyal and trustworthy.’
I nuzzle my face against Parrot’s. ‘Well, he’s very cute, too.’
‘Sit,’ commands Flynn, and Parrot obeys, but looks up at me with his innocent eyes, his tail thumping against the ground, as if to tell me we’re not done yet with the affection.
‘I think he likes me,’ I say, nodding Parrot’s way.
‘Seems like it. He’s totally smitten,’ says Flynn, but the way he looks at me, the way he doesn’t look at Parrot but directly at me, makes me wonder whether I should be blushing. Parrot yawns.
‘I fixed your front gate this morning,’ he says, changing the subject. ‘Noticed it was stuck when I came to visit earlier. Did you forget about our deal?’
‘Our deal?’
‘You know, the firewood. I was going to charge you, but since we’re neighbours I suggested a drink might work instead.’
‘I’ve been busy,’ I reply, as we nudge our way past market-goers. ‘Besides, don’t you have better things to be doing with your time than assisting random neighbours? Don’t you have … I don’t know, a job or something?’
‘Nope, actually I don’t. I’m between jobs.’ He looks up at the sky and squints. ‘Well, kind of between jobs.’ Flynn stops at one of the stands, and hands a note to the vendor in exchange for a stick of fairy floss.
‘Kind of between jobs?’
Posted by Boon's Bookcase at 07:00