Her Name Was Rose
by
Claire Allan
BLOG TOUR 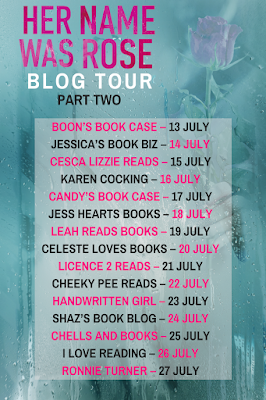 Welcome to the first stop on the Blog Tour for Her Name Was Rose by Claire Allan and I have an extract and also a review from Julie Williams for you.

Her funeral was held at St. Mary’s Church in Creggan – a chapel that overlooked most of the city of Derry, down its steep hills towards the River Foyle before the city rises back up again in the Waterside. It’s a church scored in the history of Derry, where the funeral Mass of the Bloody Sunday dead had taken place. Thirteen coffins lined up side by side. On the day of Rose Grahame’s funeral, just one coffin lay at the top of the aisle. The sight stopped my breath as I sneaked in the side entrance, took a seat away from her friends and family. Hidden from view.

All the attention focused on the life she’d led, full of happiness and devotion to her family and success in her career. I thought of how the mourners – the genuine ones dressed in bright colours (as Rose would have wanted) – had followed the coffin to the front of the church, gripping each other, holding each other up. I wondered what they would say if they knew what I knew.

I allowed the echoes of the sobs that occasionally punctuated the quiet of the service to seep into my very bones.

I recognised her husband, Cian; as he walked bowed and broken to the altar, I willed myself not to sob. Grief was etched in every line on his face. He looked so different from the pictures I had seen of him on Facebook. His eyes were almost as dead as Rose’s had been. He took every step as if it required Herculean effort. It probably did. His love for her seemed to be a love on that kind of scale. His grief would be too.

He stood, cleared his throat, said her name and then stopped, head bowed, shoulders shaking. I felt my heart constrict. I willed someone – anyone – to go and stand with him. To hold his hand. To offer comfort. No one moved. It was as if everyone in the church was holding their breath, waiting to see what would happen next. Enjoying the show

Review by Julie Williams
What a fabulous eerie journey this book took me on. It delivered all the suspense a psychological thriller should do with nail biting moments and plenty of surprises along the way.


Emily D’Arcy craves a perfect life and when she witnesses a stranger, Rose, knocked down and killed in front of her Emily steps into her life with dire consequences. Emily is an extremely vulnerable young woman carrying a disastrous previous relationship on her shoulders and to me appeared emotionally unbalanced with obsessive traits. But I also found her to be a kind, caring person which shone through with her bond with Jack who is Roses' son and Donna, her work colleague.


If you are into this genre then this is a must read as it ticks all the boxes to take you on a dark journey.


Thanks to Avon for the ARC supplied to Julie Boon which she kindly gave to me to review for the blog tour.