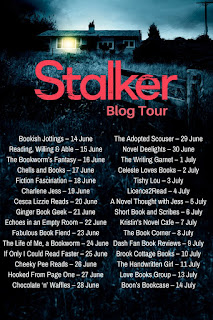 It's my turn on the Blog Tour for Stalker by Lisa Stone and today I have an extract for you. I must admit that reading the extract has left me intrigued and wanting more!.....

Extract
An hour later the clock on the mantelpiece struck six o’clock and Elsie heaved herself out of the chair and went into the hall to phone her sister. Why they didn’t have a phone in the living room like her sister did, she’d no idea. Her sister’s answerphone cut in so she left a message saying she was home and thanking her for a nice time. Then she took her case upstairs to set about unpacking. Derek would be home for his dinner before long and she’d need to check what was still in the fridge and freezer as she doubted he’d restocked it while she’d been away. She and her sister had ordered a Chinese takeaway one night, which her sister did at least once a week. She and Derek never had takeaways; perhaps she’d suggest it for tonight. But then again Derek was very conservative and set in his ways when it came to food, indeed as he was in most things so probably wouldn’t like Chinese.

Elsie returned her empty case to under the bed, dropped her dirty washing in the laundry basket in the bathroom and went downstairs. Opening the freezer door, she found to her small surprise it was still fully stocked; none of the meat or ready meals she’d left for him had been touched. She took out a steak pie for them to have and then looked in the fridge to see what vegetables were left. All of them, and the cheese, yogurts and cold meats were untouched too. What had he been living on? A couple of eggs were missing and a few rashers of bacon, hence the dirty pans. She looked in the bread bin and saw the packet of six rolls and the small loaf she’d left for him for sandwiches were untouched. Her puzzled expression gave way to a wry smile. Was it possible Derek had finally found himself a girlfriend and he’d been seeing her while she’d been away? Well, well, who would have thought it? She couldn’t think of any other rational explanation as to why he hadn’t been eating here, and if she was right she couldn’t wait to tell her sister. Derek was normal after all!

At seven o’clock there was still no sign of him so a little miffed, Elsie sat at the table to eat alone. Once she’d finished she washed the dishes and returned to the living room and the television. An hour passed and when Derek still hadn’t arrived home or thought to phone, Elsie was more annoyed than worried. He was probably with a client or his new girlfriend. If he was going to eat with her then she needed to know so she didn’t waste any more good food. His mobile number was in their address book on the hall table. Elsie seldom needed to use it as Derek was such a creature of habit. Silencing the television, she went into the hall, found his number and keyed it in. A recorded message said straightaway: ‘This phone is switched off, please try again later.
Posted by Boon's Bookcase at 07:00