The Lost Daughter
by
Gill Paul 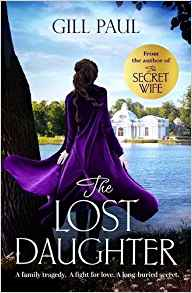 I'm super delighted to be able to bring you an extract of Gill Paul's upcoming novel, The Lost Daughter. I am a huge fan of Gill's and I really can't wait to read this one! Do enjoy a sneaky peak of the new book which is published in October.

Extract
Little Alexei was still in terrible pain, with acute swellings in his joints after being bumped around so much on the journey. The girls took turns to entertain him, trying to distract him from his suffering. Maria drew pencil portraits of their captors and tried to amuse her little brother with humorous descriptions of their characters: ‘as pompous as a walrus on a beach’, she said of Avdeyev; ‘a slippery ferret in a rabbit hole’ of his deputy, Medvedev. The girls took turns to read to him from any books they could find, and they revived Three Sisters, the Chekhov play they had performed at Tobolsk. Sometimes Alexei was well enough for a game of halma, and they moved a table close to allow him to join in.

One sunny day in June, Maria carried him down to the yard to get some fresh air. She had always been physically the strongest of the four girls and did her best to carry him smoothly, without jarring, but she could tell from the frequent intakes of breath that the movement was hurting.

She placed him in a bath chair, from where he surveyed the shadowy yard. Turrets were being built in the corners of the tall fence, and the men’s hammering mingled with the clanging bells of streetcars in the road outside.
‘Why are we here?’ he asked in a small, sad voice. ‘What do they want from us?’
Maria watched a blue butterfly flit past. ‘I suppose they want to keep us safe so we can be delivered overseas in due course. It is taking an interminable time, though.’
‘Why would we not be safe? I don’t understand.’
Maria shook her head. ‘Me neither. But I am sure it will not be much longer before we are in our new home. Where would you like to go?’
He considered this. ‘Perhaps Africa, where I could hunt lions, or India, where we could ride on elephants and shoot tigers.’
Maria laughed. ‘I hope your wishes will be taken into consideration.’

He was so pale and thin, with his gangly limbs, that it was impossible to picture him as a big-game hunter. The haemophilia he had inherited from their mother’s side of the family ruled out any activities in which he might risk injury. He would never ride a horse or a bicycle, would never ski, and even running was risky. Yet he could still have his dreams; no one could deny him that.

On the day of Maria’s nineteenth birthday, the family gave her little gifts: a hand-painted bookmark, a volume of Russian poetry and a precious Fabergé box studded with diamonds and a topaz that had been given to her mother by her sister Ella the year before the war. The box was pretty and Maria knew she should be grateful, but all the same it was hard not to think of previous birthdays: even a year before, they had still been in the Alexander Palace, albeit under house arrest. Her parents had given her a handsome gold bracelet and dozens of other presents before holding a special birthday tea with pretty cakes and her favourite almond toffee. Here, the meal was a single course of stewed meat and boiled potatoes with no desserts. They were dependent on provisions brought each morning by the nuns from a local convent and there was not a lot of variety.

That evening, as they sat in the drawing room after dinner, there was a knock on the door and her father called, ‘Come in.’
Ivan popped his head inside, then walked in holding a cake on a plain white plate.
‘Good evening.’ He bowed his head to the company. ‘I hear there is a birthday today and thought you might enjoy some medovik.’ He seemed nervous in front of her parents. ‘I wish I could say I baked it myself, but it was my mother. I bring it with her compliments.’ He smiled at Maria, who jumped up to take the plate from him.
‘You’re unbelievably kind,’ she said. ‘Truly. Please give my warmest thanks to your mother and tell her how very touched I am by the gesture.’

The family looked at each other, eyebrows raised, as Ivan backed out of the room. Leonid Sednev brought plates and all had a slice of the multi-layered honey cake. It was the first such confection they had enjoyed for many months, and even Nicholas was moved to say that it was very kind of the guard and his mother. It lifted the mood of the entire party and the girls sang a popular song together, ‘Shine, Shine, My Star’.

Once they had finished, Maria excused herself and slipped out to the hall to thank Ivan in person. He was standing at his post by the top of the second staircase.
‘You are very clever for remembering my birthday,’ she said. ‘You’ve made this day special, something I never dreamed would be possible here. I thank you from the bottom of my heart.’

Ivan took her hand and pressed it to his lips. Maria glanced over her shoulder to make sure none of the family had followed, but all the doors were closed and there was no sound from Avdeyev’s office.

Ivan was still holding her hand and suddenly he pulled her in a swift movement towards a tiny alcove by the kitchen doorway. They huddled inside, bodies pressed together, and Maria trembled. Ivan looped one arm round her waist then stroked her cheek with his finger before leaning forward to touch his lips to hers.
‘A birthday kiss,’ he whispered, ‘for the most beautiful girl I have ever seen.’
Maria gazed at the soft lips that had brushed hers, and couldn’t help tilting her head for more. Ivan held her tightly now, his lips exploring hers, and she closed her eyes feeling giddy with excitement. It was the most delicious sensation she had ever experienced, quite different from a parent’s kiss, and she wanted it to go on forever.
‘Skorokhodov!’ a harsh voice barked, and suddenly he was yanked away. Avdeyev and Medvedev were glaring at them.
‘Go to your room!’ Avdeyev snapped at Maria, and she scurried into the kitchen, terrified by his tone. She glanced back just before the door swung closed and saw Ivan being frogmarched down the stairs, one arm pulled up behind his back.