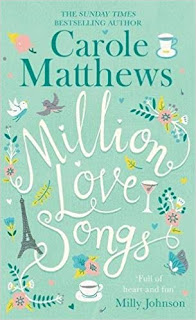 I don't know why, but whenever I go on holiday I always tend to take a Carole Matthew's book as my first read! I think it is fast becoming a Boon's Bookcase holiday tradition! Anyway, this year was no exception and I couldn't wait to dive into this one as I am a HUGE Take That fan and knew that this book had some reference to Take That (obviously by the title!) and in particular, my absolute favourite, Gary Barlow! My review is below and fans of Carole Matthews will not be disappointed!

Review
Newly divorced Ruby Brown has thrown in her safe job at the council and decides to become a waitress in a busy pub. There she becomes firm friends with Charlie who is a little bit obsessed with the amazing band, Take That. She follows them everywhere and even has a cardboard cut out of Gary Barlow in her flat, as does Ruby after going to a few gigs and realising they are rather good! (I seem to have far too much in common with Charlie, as I also have a cardboard cut out of Gary - don't judge me!).

One of the first things Charlie warns Ruby about is the pub manager Mason. She tells Ruby he is a serial womaniser and not to get involved with him in any shape or form. She will end up being another notch on his bedpost if she so much as agrees to have a drink with him.....

Ruby decides to take up scuba diving lessons - this wasn't obviously one of her better decisions when getting divorced as she has no interest in diving, until she meets her instructor Joe.

As in true Carole Matthew's style, Ruby gets herself in all sorts of dilemma's which include Mason and Joe! Will either of them turn out to be what Ruby wants after her disastrous marriage?

I won't say anymore as you will just have to read it, but I can guarantee you plenty of laughs along the way. I did have to chuckle to myself on more than one occasion as I had more in common with Charlie than I care to admit in the Gary Barlow fan girl department!

Thank you Carole for yet another corker of a book!