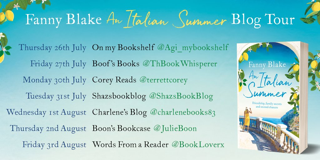 It's my stop on the Blog Tour for An Italian Summer and today I have an extract for you.


January, 2017
Sandy had been rifling through her mother’s desk for stamps
when she found the letter tucked into a cubbyhole between
a small red address book and some left-over Christmas cards.
Her mother could only have written it weeks earlier when she
was still able to come downstairs. The writing was familiar but
shaky and the envelope not properly addressed. Thinking perhaps
she should finish the job and post it for her, Sandy leafed
through the little book, noting how many names were crossed
out and initialled with a big D. Death had claimed so many of
her mother’s friends before her. But there was no Anna Viglieri
among them, alive or dead, and no one who lived in Naples.
When the nurse had finished washing her mother and giving
her fresh sheets, Sandy returned upstairs, taking the letter with
her. Miriam was lying propped up on a mountain of pillows,
her face pale and gaunt, eyes half open. She managed the
slightest of smiles. Sandy sat close where she could be sure to
be heard.
‘Mum, I found this. Shall I post it?’ She held up the envelope
where her mother could see it. It seemed important to keep
up a pretence of some kind of normality, although it hardly
mattered now. ‘Who do you know in Naples?’ She took the
bottle of Chanel No. 5 from the side and dabbed a little on her
mother’s wrists: the perfume her mother always wore and that
Sandy associated with her all her life.

A flicker of recognition, a movement of Miriam’s head. Her
mouth moved but the words were so faint Sandy had to guess
at them.
‘Find her?’ she said, leaning forward to catch a sound as her
mother’s lips moved slightly. ‘Who is she?’
But the drug being pumped into her mother’s thigh to ease
the pain had reclaimed her. Death wasn’t far away.

Naples. While her mother slept, she went downstairs to make


a cup of tea. The nurse was in the kitchen, putting the sheets
in the machine.
‘How long, do you think?’ asked Sandy, a tremor in her
voice.
The young woman looked up, kindness in her eyes. ‘You can
never tell. Maybe a couple of days, but I couldn’t say definitely.’
She slammed shut the door of the washing machine.
‘Tea?’
Having made them both a cup, Sandy left the nurse alone
while she went back upstairs. She paused by the front door to
open the face of the grandfather clock, take the crank from the
plate on the hall table and put it into the winding holes one
after the other. This was a ritual her father then her mother
had performed for as long as she could remember. It felt good
to continue the tradition; steadying. That’s all she had to hang
on to now the last link to her past was about to be broken.
Her relationship with her mother had never been easy. How
she had envied her schoolfriends with their warm kitchens and
mothers who were always there for them, cooking and caring.
But that was long ago, before she was sent away to school, and
now she was the only family member left to see Miriam out of
this world. She went back upstairs, her limbs heavy, walking on
the sage-green carpet that was faded with age, past the pictures
that had always hung in the shadows of the dark stairway. Back

in the bedroom, she took up her knitting, and began to talk
softly. This might be her last chance to say anything important.
‘Why did you push me away, Mum? Perhaps, if you hadn’t,
we might been closer instead of having this strange sense of
duty towards one another.’ She paused. ‘You must have felt
it too or you wouldn’t have been there for me when Matthew
died.’ She thought of her husband with the habitual longing
that still haunted her. When she had been blindsided by his
unexpected death, her mother had come good for her at last:
cooking, doing her laundry, tending her garden, tidying the
house, caring for her – all those things that she had no energy
for herself. And now, only two and a half years after his death,
she was losing her mother. ‘But we did love each other, despite
everything. I know we did.’
Her mother didn’t respond. Just the rattle of her laboured
breathing filled the room.
‘They say a person’s hearing is the last thing to go, but how
does anyone know that? Am I really just talking to myself?’
Sandy felt the tears stinging as they had so often over the
last week as her mother drifted in and out of consciousness.
The two of them would never make up for lost time now.
Everything between them was over. ‘There’s no point in having
regrets,’ she went on. ‘They say that too. But I do have them
– in spades. Why wouldn’t you talk to me about your family
instead of clamming up or changing the subject? In the end
I gave up asking. Just accepted.’ She reached over to pull the
pot of deep-red tulips, the ones her mother loved, to a position
where she might see them. ‘I should have insisted.’
Four hours later, she was still sitting there, having made
another cup of tea and moved from her knitting to the crossword,
although her brain wouldn’t compute any of the answers.
Her mother’s favourite music flowed softly from the ancient
CD player: Ella Fitzgerald, Nat King Cole, Frank Sinatra and
Billie Holiday. Staring out of the window at the flat grey sky,

Sandy hummed along to ‘Cry Me a River’ under her breath,
wishing Matthew had been able to die at home. This end to
a life was so tranquil compared to the incessant hubbub of a
hospital ward. He hadn’t known where he was, of course, but
all the same she would have liked him to die in peace. It was
starting to drizzle when she heard a movement behind her. She
spun round. Miriam’s eyes were open, her fingertips touching
the envelope Sandy had left on the bed. ‘Anna,’ she whispered.
Sandy leaned over her again.
‘Who’s Anna, Mum?’
But her mother’s eyes had started to close.
‘Mum! Who’s Anna?’ She was overwhelmed by frustration
and sadness.
The thin white lips moved again. ‘Find . . .’ Then nothing.
Just breath. Perhaps that was not even what she had said. There
was no way of intuiting what might be going round her mind
so close to the end, especially when she was under such heavy
sedation. But more than anything Sandy wanted to believe
that her mother knew she was there and wanted to tell her
something.
‘Find her,’ she said, taking the envelope. ‘Is that what you
meant? Well, I’ll try. God knows how but I will try.’ She slid her
hand into her mother’s and gently squeezed it. In return, she
felt her mother’s fingers tighten round hers. She had heard her.
Twenty-four hours later, her mother was dead.