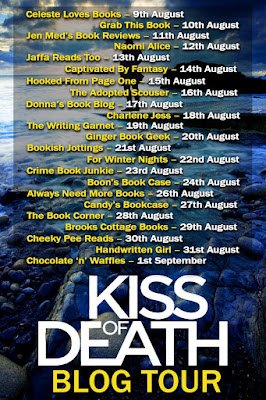 It's my turn on the Blog Tour for Paul Finch's latest book, Kiss of Death. Today, I have an extract for you so sit back and enjoy!

Detective Superintendent Gemma Piper was never less than impressive. Even now, in jeans, a T-shirt and body armour, and clambering over a rusty farm fence, she cut a striking figure. With her athletic physique, wild mane of white-blonde hair and fierce good looks, she radiated charisma, but also toughness. Many was the cocky male officer who’d taken her gender as a green light for slack work or insubordination, or both, and had instantly regretted it.
‘This lot been cautioned, Jack?’ Gemma asked.
‘They have indeed, ma’am,’ Reed said.
‘Responses?’
‘The only one I heard was this fella.’ Reed indicated Boar, who, having had his mask pulled off, resembled a pig anyway, and now was in the grasp of two uniforms. ‘Think it went something like “fuck off, you dick-breathed shitehawk”.’
‘Excellent. Just the thing to win the jury over.’ Gemma raised her voice. ‘All right, get them out of here. I want separate prisoner-transports for each one. Do not let them talk.’
‘Don’t worry,’ Wolf sneered, still gripped by the large Welsh cop, though he seemed to have recovered some of his attitude. ‘No one’s talking here except you. And you’ve got quite a lot to say for a slip of a tart.’
Gemma drew a can of CS spray from her back pocket and stalked towards him.
‘Ma’am!’ Reed warned.
DSU Piper was renowned, among other things, for almost never losing her cool, and so managed to bring herself to a halt before doing something she might regret. She stood a couple of feet from the prisoner, whose thin, grizzled features split into a yellow-toothed grin.
‘Don’t say nothing!’ he shouted to his compatriots. ‘Do you hear me? Don’t give these bastards the pleasure. Say nothing, and we’ve got plenty chance of beating this.’
‘You finished?’ Gemma asked him.
He shrugged. ‘For now.’
‘Good. Take a long look at your friends. This is likely the last time you’ll see them till you’re all on trial. And very possibly on that day, one, or maybe two of them, could be looking back at you from the witness stand. How much chance will you have then?’
Wolf hawked and spat at her feet.
Posted by Boon's Bookcase at 07:00