The Deserter's Daughter
by
Susanna Bavin


I would like to say a huge thank you to the author and Allison & Busby for sending me a copy of The Deserter's Daughter for review. I can only apologise it has taken me so long to read it! Please find my review below of this wonderful family saga. 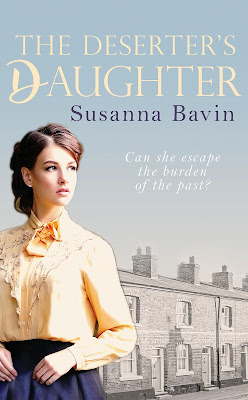 Carrie is so excited to be marrying Billy and trying on her wedding dress with her mother’s veil makes her almost burst with pride. Her half sister Evadne isn’t so happy about her younger sister marrying before her and feels bitter and jealous of her sister beating her to the alter.

When the local priest Father Kelly comes to the house and spills the beans that Carrie’s father was shot at dawn for being a deserter and not a hero as they all thought (apart from Carrie’s mother, who kept the secret for years), Billy’s mother comes marching round to inform Carrie that the wedding is off and that he wants nothing more to do with her.

Carrie is desperate to marry Billy and can’t bring believe that he doesn’t want to marry her and tries all sorts of ways to meet him to make him change his mind. He is adamant that he doesn’t want to marry a deserter’s daughter and that he has prospects as a town hall clerk and wants to get on with the rest of his life. Carrie is left distraught at this news in more ways than one…

No sooner is Carrie coming to terms with being dumped by Billy, when she meets Ralph, an up and coming antique dealer who sweeps her off her feet and promises her the world and that she won’t have to want for anything. They are married by special licence and you know what they say, “marry in haste, repent at leasure”!

Ralph and his brother Adam couldn’t be more different. Ralph is unpredictable and Carrie is wary of him and does whatever she can to please him, but the feelings just aren’t there and although she tries her hardest to stay away from Adam, it sometimes proves difficult as he is a doctor caring for Carrie’s mother, who has had a devastating stroke and is unable to move.

This is the author’s first novel and what a corker of a saga it is! Full of twists and turns and at one point, I found I was holding my breath and eager to turn the next page to read what happened! Full of suspense, tragedy, a true saga full of love and devastation (which is right up my street!) and I really cannot wait to read this author’s next book which is out in paperback in October. The attention to detail in the book is wonderful and I really can’t believe this is the author's  first novel! Wonderful.