The Makings of A Lady
by
Catherine Tinley
BLOG BLITZ 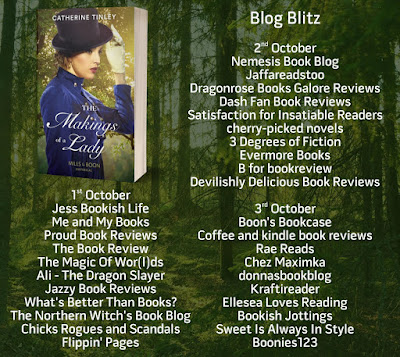 I'm delighted to be a part of the Blog Blitz for The Makings of a Lady by Catherine Tinley and below I have an extract for you. What a fabulous cover this novel has as well! Thank you to Rachel's Random Resources for letting me be a part of this Blog Blitz. 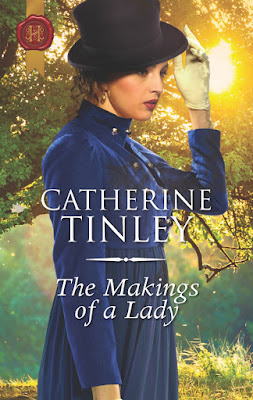 This extract is taken from chapter five. Lady Olivia and her friend Lizzie are staying at Monkton Park, a country house, as part of a house party. The guests include Jem Ford, for whom Olivia had an embarrassing infatuation four years ago. Olivia has been enjoying a flirtation with a handsome but intriguing stranger, George Manning.

Lizzie and Olivia had developed the habit of chatting in animated tones after each ball, picnic and rout, speculating about the young men and enjoying the thrill of the attention they received as young ladies. If she and Lizzie could flirt, then why should she feel uncomfortable with the men who dallied with them in turn? Especially when she now knew that Mr Manning was a man of integrity, beneath the flirtation.

Yet something about last night had rocked her. She felt unsure, as if her peace was threatened. Anxious knots had formed in her belly. Logically, though, she could not identify the threat.

Perhaps it was just that George Manning seemed so much more dangerous than the young men that she was accustomed to. He was like a romantic hero from a Gothic novel. She easily could picture him fighting heroically in battle, rescuing damsels in distress and defeating one’s enemies.

Ooh, she liked that idea! Were she ever to be in distress, she could think of worse fates than to be rescued by the dashing Mr Manning. She resisted the idea of placing Jem in that role in her imagination. It was altogether too disturbing.

‘Olivia?’ Everyone was looking at her.

‘Sorry, I was wool-gathering and daydreaming! I did not sleep very well last night. What did you say?’

‘Just that we should probably bring shawls for our walk. There is apparently a blustery wind this morning.’

In truth, the day was rather breezy. Olivia nodded. ‘I know—I was out riding before breakfast.’

She could feel George’s eyes on her. Avoiding his gaze, she nevertheless felt a slow blush flood her cheeks. Oh, why had she mentioned that?

Faith was frowning. ‘I am so sorry that you did not sleep well, Olivia. I do hope your bed was comfortable. Or was it, perhaps, something you had at dinner? I did wonder about those prawns…’

Olivia was mortified. ‘Oh, no, Faith, you mustn’t think that! The food was delightful and the room so comfortable. But you know me of old—I often struggle to sleep when away from home—especially on the first night.’

She continued to reassure Faith as the ladies all climbed the stairs in search of shawls. She would hate for her thoughtless words to upset her hostess, who had been so kind. As they continued along the landing, Olivia absent-mindedly noticed Miss Manning enter one of the bedrooms. It was only when she got to her own chamber that she thought about what she had seen. Miss Manning had gone into George’s room!

She shook herself. That should not surprise her. Miss Manning’s shawl might be in George’s bedchamber—she might have left it there at some point. The woman was perfectly free to enter her brother’s bedroom if she wished. Olivia shrugged.

She picked up her own shawl—a beautiful, soft Indian wrap in subtle shades of blue—checked her appearance in the mirror, then hurried back downstairs. As she descended, she became aware of male voices below. Jem and George were conversing.

‘Delightful! Mr and Mrs Foxley have been most kind.’ George’s voice.

‘They are generous and trusting people, that is for sure.’ That was Jem, but there was a puzzling edge to his voice. ‘Some might say they are too trusting.’

‘And do you say so, Mr Ford?’ Now it was George who sounded strange. His tone was silkily polite, but there was a barb in it. Olivia’s pace slowed. What on earth was happening?

‘Time will tell, no doubt, Mr Manning. We all of us must navigate our way through life as best we can, balancing generosity with self-interest.’

‘Indeed.’ George’s tone was curt. Olivia was now at the bottom of the staircase and George’s eyes flicked briefly towards her. ‘I am one of those who will always put others first.’ His voice was a little louder. ‘Self-interest is unknown to me.’ Now he turned towards her ‘Ah, Lady Olivia!’ He swept forward, making an elegant bow. ‘So happy to see you again—and what a fetching shawl!’

Olivia could feel herself blushing. His gallantry was pleasant—but she must not let him see that. She kept her tone even. ‘I have only left you for five minutes.’
Posted by Boon's Bookcase at 06:30