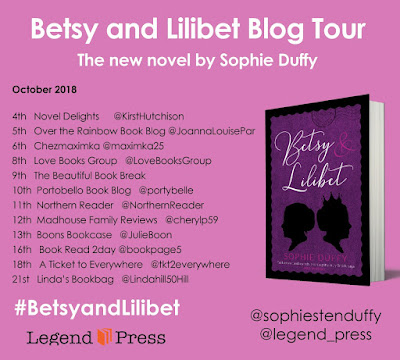 When I read the blurb about this book, I just knew it would be "right up my street". I love a wartime saga and am a proud Royalist! Read my review below of this fabulous, witty, emotional book. I would like to say thank you to Lucy at Legend Press for sending me a copy of the book to review.

When a baby girl is born on the same day as the future Queen, there is only one name to call her. Elizabeth (or Betsy as she will be known).

Betsy lives in South East London with her sister Margie (who reminds me of Princess Margaret with all her shenanigans!) and later her sister Mabel (Mab). Her parents own an Undertakers and as it's not long until the outbreak of WWII, they will find themselves more busy than ever!

Betsy has a good friend called Janet, who through a tragedy of her own, ends up living with the family and they treat her as one of their own.

As the war goes on and the girls grow up, Betsy meets Mick and falls head over heels. She even gets him a job in the family firm and they soon realise that they want to be together and Mick pops the question.

Meanwhile, Janet becomes pregnant out of wedlock and it is Betsy who comes up with the idea of sending her away until she has the baby and then Betsy bringing the baby up as her own. It seemed the perfect solution as Janet would be able to continue living her life and as Betsy and Mick had not been blessed with a baby, what could possibly go wrong! On paper, it seemed to be the perfect plan, until Betsy becomes pregnant soon after! How is she going to explain having 2 babies six months apart!

What I love about this book is that it starts with Betsy talking in 2016 when she is in a care home by the seaside, having fractured her hip and then her reminiscing about the old days. The chapters alternate between wartime and now and everything that happens in between, until the current day. Very cleverly written and worked fantastically well.

I also love the fact that it was based in South East London (where I was born and lived for nearly 30 years) and also mentions places near where I live now (London/Kent border). Not to mention the little quotes from Queen Elizabeth II herself along the way!

This is a wonderfully written book which will leave you in tears one minute and chuckling with laughter the next!

Thank you again to Lucy at Legend Press for sending me a copy to review.
﻿