The Fifth Letter
By Nicola Moriarty 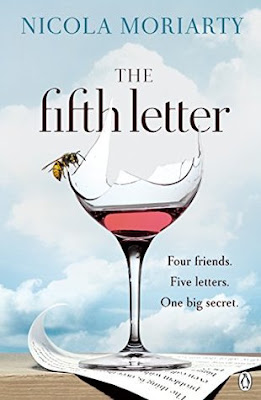 This is my first read by this author, the cover and synopsis drew me in as well as seeing it on Twitter and Facebook.

It tells the tale of four women now in their thirties who have been best friends since their first day at High school, so over twenty years. Joni, Deb, Trina and Eden follow a tradition and meet up annually for a holiday which is organised by Joni.

This year Joni chooses a house which is in a bit of a remote location in the hope of getting them to reconnect, as she feels they are each so busy with their lives that they are drifting apart as a group. She has also asks them to each write an anonymous letter sharing a secret. These four letters cause quite a stir in their own right but when Joni discovers a fifth letter discarded in the fire grate, suspicion and mistrusts are rife.

I liked the concept of the plot and found myself trying to guess who had written each letter. It transpires that not everyone is honest with their letter and each friend has to decipher between truths and lies. They also discover that none of them lead the perfect life each had imagined and guilt is just one of the emotions that is displayed in the conundrum of this story.

Each of the women has different characteristics and in the beginning I felt that Joni was the strongest, the organiser and the bossiest, but I changed my mind as the story unfolded.

I enjoyed the chapters where Joni had her confessional sessions with Father O’Reilly interesting as the Priest, an outsider of the group, guessed who had written the fifth letter with accuracy and wisdom.