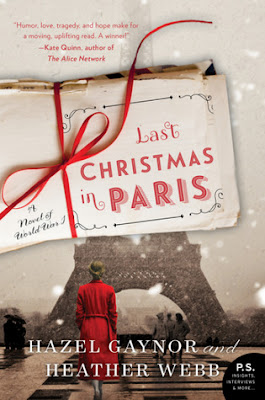 
Last Christmas in Paris is a clever collaboration by Hazel Gaynor and Heather Webb and what a terrific job they both did in bringing to life the tragedies and hopes during WW1.

The story begins in 1968 but it is the letters written during wartime that tells the very moving tale of just how the brutality of war changes everyone. Evie Elliott, her brother Will and their childhood friend Tom are desperate to serve their country with the belief that the war will be over within months and normality will resume.

With Will and Tom off to do their bit in 1914 the correspondence begins and becomes quite regular and most welcome especially between Evie and Tom. Evie finds herself desperate for news from the battle grounds while Tom is anxious for the companionship the written words bring.

When Evie is given the opportunity to become a journalist she is set free to tell the truth of how the effects war is having first hand and not everyone is happy with the content in her column. Evie also takes up the role of delivering post, much to her parents dislike, but to her this position means she is helping the war effort by giving much awaited news to those left behind. Evie also corresponds with her dear friend Alice who has taken a nursing post in France and often writes of her wish for them all to spend Christmas in Paris. All letters are eagerly awaited but those between Evie and Tom are lifelines but neither sadly feels they can declare their love for each other.
I felt all the emotions that this this book offers, which at times are hard to bear. A truly powerful read that has passion, courage and breath holding moments that ooze page after page.

I was lucky enough to win this book from a lovely book blogger and certainly consider it a contender for book of 2017.
Posted by Boon's Bookcase at 07:00