Can You Keep a Secret
by
Karen Penny
Blog Tour 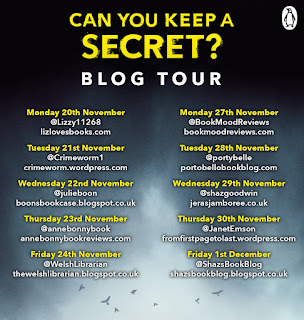 Thank  you to the lovely Julie Williams for agreeing to review this book for me as part of the Blog Tour. Find her review below, sounds intriguing........

This mystery, crime fiction novel is mainly central to Thornbury Hall home to the Bagenal family.  The book has alternating chapters between 1991 and 2017.


It took me awhile to get hold my attention as at first I thought the story was just about eccentric adults and posh stuck up kids which I couldn’t relate to. However, I persevered with the story and clues were hinted at which finally revealed secrets hidden in both eras.


This novel reminds me of a mishmash between Downton Abbey and Murder She Wrote.

In 1991 Rachael Bagenal and her friend Lindsey just 15 years old are enjoying life with weekends and holidays spent at Thornbury Hall with Rachael’s parents who accept Lindsey as one of their own and Patrick Rachael’s brother and his friends. The place appears so lively and fun, something that Lindsey doesn’t have within her own family. This quite idyllic time comes to an abrupt end when the sudden death of Peter Bagenal occurs leaving everyone in shock and they go their separate ways.


It is not until 2017 when Lindsey, now a forensic photographer, meets up again with Patrick that she falls in love with him and a reunion weekend is planned for a final shindig at the now crumbling Thornbury Hall before it is sold. Hidden secrets are finally revealed with horrendous consequences that left me shocked and aghast.

Thank you to Julie for asking me to guest review this book on her blog.