One Christmas in Paris
by
Mandy Baggott 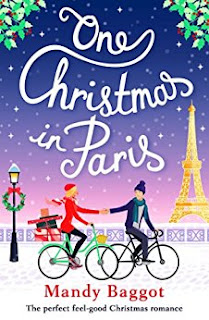 They say Paris is the City of Love, so bring your je ne sais quoi and don’t forget the mistletoe!

Ava and her best friend Debs arrive in Paris just as the snow starts to fall. The Eiffel Tower glitters gold and the scent of spiced wine is all around, but all Ava can think about is Leo, her no-good, cheating ex.

Debs is on a mission to make Ava smile again, and as they tour the Christmas markets, watch lamplight glittering on the river Seine, and eat their body weight inpain-au-chocolat, Ava remembers there’s more to life than men ... Until they cross paths with handsome, mysterious photographer Julien with his French accent and hazelnut eyes that seem to see right inside her.

Ava can’t ignore the intense chemistry between them, but her fingers have been burned before and she can’t forget it, especially when her ex, Leo, starts texting again. Can Ava really trust Julien – and what exactly is his secret?

Will Ava go home with a broken heart, or will she find true love amongst the cobbled streets of Paris?

Join Ava and Julien in the most romantic city in the world this Christmas, as they discover the importance of being true to themselves, and learn how to follow their hearts.

One Christmas in Paris is a gorgeous, laugh-out-loud romantic comedy – perfect for fans of Jane Costello, Miranda Dickinson and Lucy Diamond.


Leo:[EMAIL] I’m sorry. Can we talk?[END EMAIL]
Ava Devlin swiped the email hard to the left and watched it disappear from the screen of her iPhone. That’s what you did with messages from liars and fakes who had whispered one thing into your ear, as they wrapped their arms around you, and did the complete opposite when your back was turned. She swallowed back a bitter feeling. She had always worried that Leo – successful, rich, good-looking in a Joey Essex kind of way – was maybe a little bit out of her league.
‘Boss or boyfriend?’
The question came from Sissy, the hairdresser who was currently coating Ava’s head in foils and a paste that felt as if it was doing nuclear things to Ava’s scalp.
‘Neither,’ she answered, putting the phone on the counter under the mirror in front of her. A sigh left her. ‘Not any more.’ She needed to shake this off like Taylor Swift.
Giving her reflection a defiant look, she enlarged her green eyes, flared the nostrils of her button nose and set her lips into a deliberate pout she felt she had never quite been able to pull off. With her face positioned like she was a Z-list celeb doing a provocative selfie on Twitter, she knew she was done. With men. With love. With
everything. Her ears picked up the dulcet tones of Cliff Richard suggesting mistletoe and wine, floating from the salon sound system. Her eyes then moved from her reflection to the string of tinsel and fir cones that surrounded the mirror. This rinky-dink Christmas crap could do one as well. Coming right up was a nation getting obsessed with food they never ate in the other eleven months – dates, walnuts, an entire board of European cheeses – and a whole two weeks of alterations to the television schedule – less The Wright Stuff and more World’s Strongest Man. And now she was on her own with it.
‘Well,’ Sissy said, dabbing more goo on Ava’s head, ‘I always think Christmas is a good time to be young, free and single.’ She giggled, drawing Ava’s attention back to the effort Sissy was putting into her hair. ‘All those parties... people loosening up with goodwill and...’
‘Stella Artois?’ Ava offered.
‘You don’t drink that, do you?’ Sissy exclaimed as if Ava had announced she was partial to Polonium 210. ‘I had a boyfriend once who was allergic to that. If he had more than four it made him really ill.’
‘Sissy, that isn’t an allergy, that’s just getting drunk.’
‘On lager?’ Sissy quizzed. ‘Doesn’t it mix well with shots?’
Ava was caught between a laugh and a cry. She swallowed it down and focussed again on the mirror. Why was she here having these highlights put in? She’d booked the appointment when she’d had the work do to go to. Now, having caught Leo out with Cassandra, she wouldn’t need perfect roots to go with the perfect dress he’d bought her. She didn’t even like the dress. It was all red crushed velvet like something a magician’s assistant might wear. Like something her mother might wear. But Leo had said she looked beautiful and she remembered how that had made her feel at the time. All lies.
‘Stop,’ Ava stated abruptly, sitting forward in her seat.
‘Stop?’ Sissy clarified. ‘Stop what? Talking? Putting the colour on?’
‘All of it,’ Ava said. She put her fingers to the silver strips on her head and tugged.
‘What are you doing? Don’t touch them!’ Sissy said, as if one wrong move was going to detonate an explosive device.
‘I want them off... out...not in my hair!’ Ava gripped one foil between her fingers, pulling.
‘OK, OK, but not like that, you’ll pull your hair out.’
‘I want a new look.’ Ava scooped up her hair in her palms, pulling it away from her face and angling her head to check out the look. Nothing would make her jawline less angular or her lips thinner. She sighed. ‘Cut it off.’ She wanted it to come out strong, decisive, but her voice broke a little at the end and when she looked back at Sissy, she saw pity growing in her hairdresser’s eyes.
‘Well... I have to finish the tinting first.’ Sissy bit her lip.
Ava didn’t want pity. ‘Well, finish the tinting and then cut it off,’ she repeated.
‘Trim it, you mean,’ Sissy said, her eyes in the mirror, looking back at Ava.
Ava shook her remaining silver-wrapped hair, making it rustle. ‘No, Sissy, I don’t want it trimmed. I want it cut off.’ She pulled in a long, steady breath. ‘I’m thinking short... but definitely more Bowie in his heyday than Jedward.’
‘That short.’ Sissy was almost choking on the words.
‘You did say a change was good,’ Ava answered. ‘Change me.’ She sat back until she could feel the pleather at her back. ‘Make me completely unrecognisable even to my mother.’ She closed her eyes. ‘In fact, especially to my mother.’
With her eyes shut, she blocked out everything – Cliff Richard, the tinsel and fir cones, Leo. A different style was just what she needed. Something that was going to go with her new outlook on life. A haircut that was going to say, You can look, but if you set one eyelash into my personal space, suggesting joy to the world, you will be taken down. Nothing or nobody was going to touch her.
Ava’s phone let out a bleep and she opened one eye, squinting at the screen. Why didn’t Leo just give up? Why wasn’t he suctioned to Cassandra like he had been for God knows how long? She was betting Cassandra had never had to use Clearasil.
Sissy leant forward, regarding the phone screen. ‘It says it’s from Debs.’
Cheered considerably, Ava reached for the phone, picking it up and reading the message.


I know I said not to bring anything, but I totes forgot to get something Christmassy. Can you get something Christmassy? To eat... like those crisps that are meant to taste like turkey and stuffing or roasted nuts and cranberry. And bring red wine, not white, because I got three bottles of white today. And if you’ve completely forgotten all about coming to mine tonight for neighbourly nibbles before I leave for Paris then this is your reminder. Debs xx


Debs texted like she was writing a dissertation. There was no OMG, FFS or TMI with Ava’s best friend. And Ava had forgotten about the ‘neighbourly nibbles’. That was what having a break-up on your plate did to you – addled your brain and fried the important relationship circuits. Well, she was taking control now – elusive and aloof to anyone but her best friend – and the only frazzled motherboard was going to be the one with wires connected to men.
Ava looked into the mirror at Sissy. ‘After you’ve cut it, Sissy, I want you to make me blonder,’ she stated. ‘And not the honey kind.’ She smiled. ‘The Miley Cyrus meltdown kind.’ 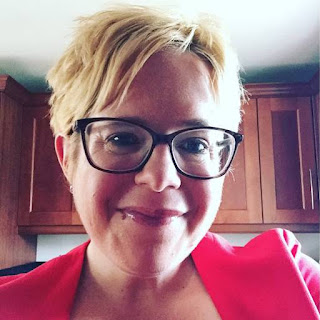 Mandy Baggot is an award-winning author of romantic women’s fiction and a member of the Romantic Novelists’ Association. In Feb 2016, her Bookouture novel, One Wish in Manhattan was shortlisted for the Romantic Novelists’ Association Romantic Comedy Novel of the Year award. A contributor to writing blogs and short story anthologies, she is also a regular speaker at literary festivals, events and women’s networking groups.

Mandy loves mashed potato, white wine, country music, Corfu and handbags. She has appeared on ITV1’s Who Dares Sings and auditioned for The X-Factor and lives in Wiltshire, UK with her husband, two children and cats Kravitz and Springsteen.