All She Ever Wished For
by
Claudia Carroll
Blog Tour

I just love the cover of this book and can't wait to put this on my Christmas reading pile for this year!

One wet winter night, two women meet on a bridge. One is Tess Taylor, a personal trainer on the way to meet her boyfriend for date night. The other is Kate King, a celebrity married to a handsome billionaire who just happens to make her cry. In the cold dark evening, there is nothing to link them together but the bridge they shiver on. Little do they know they’ll both hold the key to each other’s future marriage…
All She Ever Wished For tells the story of what happens when your dream is about to come true. And what happens when that dream turns into a bit of a nightmare… 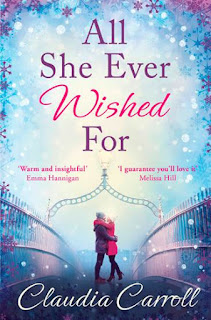 OK, I try my best to think calmly and rationally, gulping in one last mouthful of fresh air before snapping the bedroom window shut. So according to this letter a major problem has arisen, but I’m going to deal with it efficiently and with minimal stress. I’ll tell Bernard, of course, because he’s officially the most understanding man on the planet and if he can’t think of a way to get me out of this, then no one can. Then I’ll mention it to my nearest and dearest on a strict need-to-know basis only, because this is surmountable. After all, people manage to wangle their way out of situations like this all the time, don’t they?
Besides, it’s just not possible. True, there’s never a good time for an axe like this to fall, but the timing here really couldn’t be much worse. In one month’s time, Bernard and I are getting married; it’s as simple as that.  So trying my best to channel Kate Middleton, I trip downstairs with the letter clutched in my fist to somehow break the news to my wedding-planner-in-chief. Which would be Mum. I find her in the kitchen, walloping the hell out of the Magimix, busy making the icing for my wedding cake.
‘Where did you disappear off to? You’re supposed to be here helping your dad and me,’ she says crossly when she sees me coming into the kitchen. Bear in mind this is a woman who’s got about two hundred pounds of lamb cutlets in the deep freeze. You don’t mess with a woman with two hundred pounds of anything in the deep freeze.
‘Yeah, I know,’ I say in a wobbly voice I barely recognise as my own, ‘but the thing is, Mum, something a bit, well, unexpected has just come up—’
‘You’re as bad as that oaf out the back garden. Now grab an apron and start making yourself useful. You can drain the rum marinade off the sultanas and dump them into the mixture. Barring your father hasn’t already drunk the rum himself, that is. Which, to be honest with you, I wouldn’t put past him.’
‘Mum, you’re not listening to me—’ ‘Jesus, Tess, you’re worse than useless! What was the point in you taking time off work to help if all you’re going to do is stand there and let me do everything? May I remind you, madam, that getting married at home was all your bright idea?’ Then turning back to her Magimix, she mutters darkly, ‘getting married to Bernard in the first place was all your bright idea too, let’s not forget.’ Now normally that last sentence would automatically trigger The Conversation. The same bloody conversation I’ve been having with just about everyone ever since Bernard and I first got engaged. But under the circum­stances I let it slide and instead just shove the letter under Mum’s nose, then wait the approximate two-second delay while she processes it.
But there’s silence. A long, bowel-withering silence.
‘Well, this has to be a joke,’ she eventually says, all the blood suddenly draining from her face. ‘Maybe something Monica and Stella would do to get a rise out of you before the hen night?’
Monica and Stella are my two best pals and although they both love a good giggle as much as we all do, there’s no way in hell they’d ever contemplate doing something this cruel.
‘It’s not a joke. This isn’t the girls messing. Look at the headed notepaper. This is legit. Believe me, it’s about as legit as it gets.’
It says a lot about just how serious this is that Mum abandons her Magimix and slumps down wearily at the kitchen table, unable to say much else.
She doesn’t need to though.
The crumpled look on her face tells me everything I need to know