The Love Shack by Jane Costello 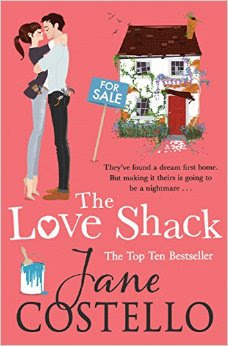 Life's great when you're 29 years old with a gorgeous girlfriend and fulfilling job. Until you have to move back in with your mum . . .Dan and Gemma have found their dream first home, but the asking price is the stuff of nightmares. The only way they'll ever save enough for the deposit is by moving in, rent-free, with Dan's mum.It's a desperate solution, but it's only for six months. And Gemma's determined to make it work, no matter how bad things get.But between Dan's mum's kitchen karaoke, her constant innuendos, irrepressible argumentative streak and - worst of all - her ham and pineapple curries, life back at home would test the patience of two saints. Which Dan and Gemma most definitely are not. Then, as they're trying to convince themselves it will all be worth it, Gemma's past comes back to haunt her. And suddenly the foundations of their entire relationship are shaken to their core…

It seems every time I go on holiday I have the latest Jane Costello book to read and this year was no exception! I sat and read this on my sun bed in just over a day!

I have told Jane Costello over on Twitter that I have been caught belly laughing on several occasions reading her books and this book was just the same.

Dan and Gemma live together in a rented flat, but want to buy a house together so to save money they move in with Dan's Mum "temporarily" to save on rent so they can save for a deposit.

Now, if you have read any of Jane's previous books, you will know that things never go to plan and so once they move into Dan's Mum's (Belinda) they soon start to wonder if they have made the right decision.

Belinda is not your common and garden Mother in Law. She is a party animal and manages to mortify Dan on a daily basis! Some of the things she said and did made me cringe, but she was a great character!

I love the character of the Estate Agent Rich (who likes to think he is a big cheese in real estate and God's gift to women!!). He had me laughing out loud on many occasions!

Gemma falls in love with Pebble cottage and badgers Rich to get the cottage by hook or by crook, but you just know that things won't run smoothly, especially as Gemma's ex comes on the scene and blows her feelings about the future sky high!

Another great read by Jane Costello. I have read all her books and eagerly await her new ones every year.