The Girl Who Got Revenge
by
Marnie Riches
BLOG TOUR 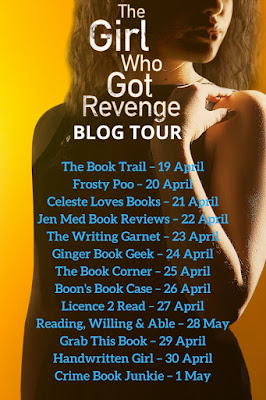 ‘How can you explain this?’ Van den Bergen asked, pushing the stapled sheaf of printouts across the table towards Abadi.
In the interview room, which had already taken on the cabbagey fug of Marie, George was seated at the very end of the bolted-down, battered table, observing this unassuming middle-aged doctor. Abadi wore conservative slacks, a V-neck jumper over a crisp white shirt, open at the collar, and had stubble that attested to a long day in the surgery. His hair was starting to thin, though George was certain he must dye it black, since there was no grey to be seen. It was the only obvious sign of vanity in an otherwise unobtrusive-looking, diminutive man whose accent barely hinted at his Middle Eastern origins. Was it possible that this guy was a serial murderer of elderly patients?
Abadi took his tortoiseshell glasses from the case on the table with trembling hands. Pushed them up his nose and started to leaf through the papers. ‘I don’t know what these documents are. Why are you showing them to me? Lawyers?’ He examined the headed paper, clearly seeing but not reading in his barely concealed panic.
This doesn’t look like some hardened criminal or con man to me, George thought. But she knew better than that as a criminologist – especially given some of the cases she had helped Van den Bergen to solve. The worst predators were almost always the least obvious and most intelligent of suspects. She opened up a stapler and started to run her finger over the chunks of staples so that they formed an unbroken phalanx. Watching. Half-thinking about Rivka Zemel’s adulation of the Force of Five. Wondering how it had all panned out and knowing that four of the men, at least, had made it to old, old bones. Had Dr Saif Abadi deliberately composed the ending of their fascinating and epic stories?
Marie rotated the pearls in her ears, fixing the suspect with her stark blue eyes. ‘You know exactly what these are, Dr Abadi, because they’ve been read out to you by the solicitors who drafted them, haven’t they?’ Her voice was small but retained a certain steel to it. Though Marie didn’t look like much, George knew she was far from a pushover.
Abadi shifted in his seat. Swallowed hard. ‘Have I?’
‘Stop flirting, Dr Abadi,’ Van den Bergen said. ‘This interview tore me away from some very important health-maintenance involving a bowl of blueberries and ten millilitres of Gaviscon. Now, my detective here has asked you about these legal documents. Why don’t you explain to us all how you came to be named in the wills of Brechtus Bruin, Kaars Verhagen and Arnold van Blanken.’
George considered the hundreds of prison inmates she’d interviewed as part of her academic research; the women she’d been banged up with as a girl when she’d fallen foul of the law, thanks to an almighty administrative cock-up and one ailing detective. Most of them either denied, denied, denied or wore their crimes like an extravagant tattoo to be feared and revered. As Abadi wiped the sheen of sweat from his upper lip and blinked hard behind the thick lenses of those glasses, she wondered which kind he would be if he turned out to be guilty. A denier or a boaster.

To order a copy of the book from Amazon click here
Posted by Boon's Bookcase at 07:00