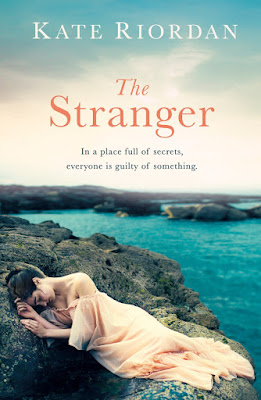 It's my turn on the Blog Tour for The Stranger by Kate Riordan. Below I have an extract for you, so sit back and enjoy a chapter from this book that is receiving rave reviews on social media!

In the hushed hours of deep night, the cove looks just as it
did a few hundred years ago, when men gathered on its
shore to lure unlucky ships on to the rocks. Some say if
you’re that way inclined, sensitive to the flimsiness of what
separates then from now, you can still hear the groan of
timber on rock, the pitiful cries from the decks. You can
see the treacherous, bobbing lamps, and the surrender of
white sails sinking beneath the waves.
The blackout has returned Breakheart Cove to the seventeenth
century. The civilizing lights that usually shine
from houses dotting the cliffs have been snuffed out by
dense-woven fabric that takes an age to put up as dusk creeps in.
At Penhallow Hall, thirty-three windows must be covered as the sun sets.

Further up the coast, the war is more in evidence. There
are two new pillboxes along the cliff path beyond the village
of Vennor– one disguised as a tiny cottage, complete with cheery curtains of blue gingham. Further on still, straining against its steel cables, is the bloated outline of a
barrage balloon. But back at Breakheart Cove there are no rolls of barbed wire to keep out the enemy. This small breach of the coastline has been forgotten by the war machine swinging into action elsewhere.

Out at sea, a bell-topped buoy is caught by the rising swell and chimes mournfully.
And, as if in reply, the church bell just around the headland at Vennor begins to toll.
It hasn’t been rung for nearly a year now, not since war was declared the previous September, and it’s never been rung at night.

The sound comes to people first in their dreams, but it’s too urgent to be absorbed
into sleep for long. Along the coast and in the crooked, tightly packed lanes of Vennor, lights begin to go on. Teeth are put in, shoes are put on. Disbelief settles into fear. The invasion has begun. The Germans must be coming, they say to each other.

The Germans must be here.

But wait. There’s something strange on the beach at Breakheart Cove, where steep steps rise to the path above. As the storm clouds part briefly, the moon illuminates wax-pale limbs, awkwardly splayed. She doesn’t move, not as the rain
begins to fall on her open eyes, or as the sea foam creeps and spreads, darkening the sand as it edges closer. It pulls back with a reluctant sigh before it can reach her, but the next set of waves are more determined. The distant thunder rolls for a last
time as the water finally lifts and takes her.

At dawn, in the deep silence of the boathouse, Rose is reading someone else’s diary, her eyes moving fast across bold strokes that have bled into thick, creamy paper.
The last entry was written yesterday, probably not long before the party guests began to arrive, forcing Penhallow out of its habitual solitude. The ink is only hours dry.

She closes the book with infinite care and stands on shaky legs. The last embers of her anger have been doused by clammy dread, like water filling the mouth of someone about to be sick.

‘Oh, Diana,’ she whispers. ‘What have you done?’ But she thinks she knows, even as she says the words. Speaking aloud alters the weight of the air around her.

The boathouse, silent again but for the creek water lapping beneath the floorboards, no longer feels empty. Her eyes flick to the armchair and, for an instant, she sees Diana curled there, safely asleep under one of the airmen’s jackets.

But when she blinks she’s alone again, the charge gone out of the room.

She knows in her heart that Diana left last night, while the bomber’s moon still silvered the garden and the wind beat the sea into mist against the rocks. After what had happened at the party, it wouldn’t have taken much to lure Diana down to
Breakheart Cove, she who can never resist the dark pull of danger.