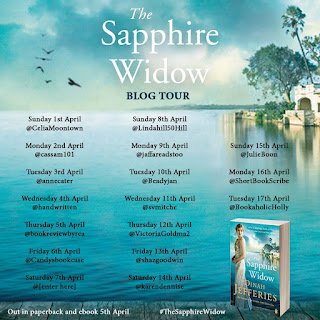 It's my turn today on the Blog Tour for The Sapphire Widow by Dinah Jefferies. My very good friend and guest reviewer, Julie Williams, loves this authors books and I must admit, I am yet to read them, but as I just adore this cover, I am going to give this one a try as soon as I can! 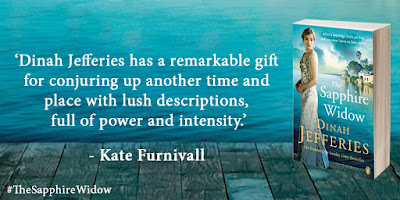 Ceylon, 1935. Louisa Reeve, the daughter of a successful British gem trader, and her husband Elliot, a charming, thrill-seeking businessman, seem like the couple who have it all. Except what they long for more than anything: a child.
While Louisa struggles with miscarriages, Elliot is increasingly absent, spending much of his time at a nearby cinnamon plantation, overlooking the Indian ocean. After his sudden death, Louisa is left alone to solve the mystery he left behind. Revisiting the plantation at Cinnamon Hills, she finds herself unexpectedly drawn towards the owner Leo, a rugged outdoors man with a chequered past. The plantation casts a spell, but all is not as it seems. And when Elliot's shocking betrayal is revealed, Louisa has only Leo to turn to...

Dinah Jefferies is the author who woke my passion for reading Historical Fiction and this latest book is just as enchanting as her previous ones.

There is something special about Dinah’s colourful writing that instantly transports me to the current location and fills me with its sights, sounds and smells.  Whether it is a house, street or, as in this book a cinnamon plantation, I am right there as each setting is so beautifully described and brought to life.

This story has loss, vulnerability, friendship and love with both villains and heroes.

Set in Ceylon, Louisa Reeves is charming, sensitive and caring who at a time when she appears to have lost everything still manages to gather her strength and courage to take responsibility for Connor, a child who is also grieving and very scared.

I have no problem in recommending this book and awarding it 5 Stars as the vivid and atmospheric words are magical.

My thanks to Net Galley for the digital ARC – this is my own opinion of The Sapphire Widow.