A Promise Between Friends
by
Carol Rivers 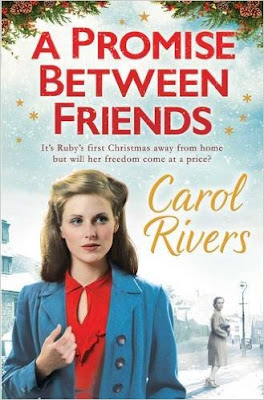 Ruby is a headstrong, naive girl who wants more out of life than living in a two up two down house with a husband and family and so when she meets Anna who offers her a job as a model, you just know that things are going to go pear shaped!

Ruby meets Nick, who is a friend of Anna’s and they begin a relationship, much to the annoyance of Anna. Ruby loves feeling wanted and needed and just doesn’t see the signs that what Anna expects of her in her job, isn’t the same as what Ruby thinks it is and she realises to her cost that she may be in too deep.

Not only is Ruby trying to make a better life for herself, she is trying to find out the root cause of why her beloved brother committed suicide just two years previously. An act that has sent her mother off the rails and her father trying to keep the family together.

This is a fabulous story of a London girl who sets out to find a better future for herself, but with sometimes disastrous consequences. The characters were very well written and descriptive (even if I didn’t like some of them!).

Another cracker from Carol Rivers and I hope it’s not too long before there is another one to get my teeth into!