Today on the blog I introduce the new novel

Jammed Up
by
Steven Hayward 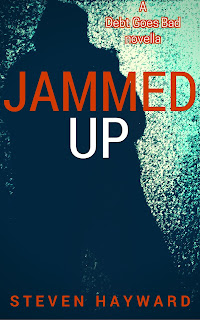 A rudeboy never forgets. It’s been ten long years and ‘Jam’ has been working his way through a list of men who tormented his best-friend, Jabba. Now there’s only one name left to cross off…

When he takes an easy lookout job for criminal entrepreneur, Herbert Long, he knows something’s not quite right. Knock-off gear and bent coppers have never been his bag, but the money’s good and he doesn’t want to live with his aunt forever. All he has to do is get down to the depot, watch a handover and report back what he sees. Little does he know what he’s getting himself and Jabba in to.


He’s not the only one nervous about the deal, DI Terence Pinner needs this to go off smoothly to settle a debt that has him enslaved to South London gangster Raymond Riggs. But with so many people involved and serious money at stake, things get messy very quickly.


Out of his depth and up against an organised criminal gang, Jam has to learn fast to stay alive. But if there's one thing that keeps him going, it's thoughts of sweet revenge...

Exclusive extract of Chapter One

After ending the call to his friend, Jam looked up to find that all the other customers had now left the café and the girl who’d served him with the all-day breakfast was clearing the vacated tables. He mopped up the egg yolk with the crust of his bread and repeatedly glanced across at her to see if she would look back. He didn’t want much from life, but one of his daily goals was to secure the smile of a pretty girl and all day long, he’d been stuck in that grimy, old house fitting doors and shelves.
She busied herself loading the plates onto a tray and then wiped the table clean. When she turned to head back to the kitchen, she peered across to the only occupied table, and smiled when the young man returned her gaze.
He waited for her to reappear but when some guy acting like he owned the place came for his plate, he dropped the exact money for his food in small change onto the table and left. He was in no hurry to go home to the damp room in the upstairs flat that his ageing auntie rented in Mile End. And anyway, it was still rush-hour and all those bankers needed to get home for their tea. He felt a bit like a stalker, waiting along the street from the café, hoping there wasn’t a rear exit by which she might have already left. He only wanted to get another smile. And maybe ask her name.
He watched as a tube train arrived at the platform at South Woodford, and moments later, a stream of people exited the station and crossed the road towards him. He didn’t know the area at all before yesterday, but it felt like a nice enough place. He stepped back from the kerb to let people pass and took the packet of Marlboro from his coat pocket. Then he remembered tossing his dead lighter into someone’s dustbin when he walked away from the house earlier.
‘Scuse me, cuz. You gotta li…’ The man in the suit walked past without the slightest reaction; he could have been in a parallel universe. Jam slumped back against the wall.
‘Scuse me, lady.’ That time, there was at least some acknowledgement he existed, but the woman shook her head without even waiting for the question and stepped past him into a shop.
‘Did you want a light?’ It was a young female voice and he spun around, gratefully. Standing in front of him, holding up a lit cigarette, was the waitress from the café.
‘Fank you,’ he said, putting his own cigarette to his lips and leaning in to take the light from hers. ‘Startin' to fink I’m invisible or sumfink.’
‘Wrong time of day to expect any humanity around here,’ she said, looking about her at the frustrated faces, silently blustering at the obstruction she was causing in the middle of the pavement.
‘Fanks,’ he said. ‘Glad I ain’t beggin' fa food. Man could starve.’
‘What? After all you’ve just eaten?’
‘Ay, best meal of da day, dat.’
‘Yeah, when you eat it in the morning!’ That time when she smiled, he almost fell into her eyes.
‘What way you goin'?’ He stepped forward to look in the direction she was heading, oblivious to the three people who had to break their stride to walk around him. ‘I was just waitin'… you know, for da trains to lighten up a bit. Rough being lock up wiv dis lot.’
‘I don’t blame you…’ she said. ‘Me? I haven’t got far to go. Bit of a walk, but I prefer to stretch my legs after standing all day.’
At that moment, he couldn’t stop himself from looking down. She was wearing sturdy flats. Sensible shoes, his auntie would have called them. Yet, even through her heavy black tights, he could see the outline of a shapely calf tapering to a slender ankle.
‘Nice,’ was the only word that came out, and when he looked back at her face, she was staring at him quizzically.
‘Anyway,’ she said, ‘nice to meet you. Enjoy your cigarette.’
‘Yeah, fanks… you too.’
‘Bye then.’
‘Ah… I could walk wiv you, you know.’
‘It’s okay, I know the way.’ She smiled. ‘And you’d be getting too far from the station.’
‘But… I owe you… for da light. Wha’bout a drink? Dere’s a pub jus’ round da corner.’
‘Look, I really need to get home.’ Her voice was firmer as she stepped to the side.
‘Okay,’ he said, shrugging his shoulders. ‘At lease tell me your name.’
‘Maybe next time,’ she said, before heartlessly dousing his satisfied smile by adding, ‘I’m already late for the childminder.’
‘Ah… okay.’ His face dropped. ‘Right den. Okay, I’ll see you in da caf again, yeah.’
‘Yeah, you do that.’ She nodded. ‘I’ll see you next time.’
‘You proper will, baby,’ he said, as he watched her sculpted calves walk away.
By the time she reached the end of the street, she had blended into the flow. Jam decided to spend the evening in the gym and avoid explaining the latest twist in his working arrangements to his reluctant landlady. He crossed the road towards the station without seeing the young waitress look around and smile before she turned right and continued walking down the side-street towards home. 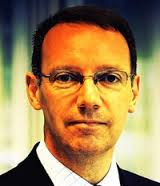 Steven is a financial crime consultant who decided some time ago his dream was to write fiction. His debut novel, Mickey Take: When a debt goes bad..., features an ex-banker who throws in the towel on his "big" City job. But that's where the similarity ends. Between writing crime thrillers and fundraising for New Ways (http://www.newways.org.uk), Steven periodically ventures back into the ranks of London commuters. In contrast, Michael Field, the protagonist and primary narrator of Mickey Take, is perhaps less likely to resume his career in financial services anytime soon!

In May 2016, Steven releases his second book in the Debt Goes Bad series, a novella called Jammed Up, in which a familiar cast test the moral fibre of two new central characters in a story of loyalty, betrayal and injustice.

Steven lives in Kent, England with his wife Helen and their beagle Ella.