The One We Fell in Love With
by
Paige Toon 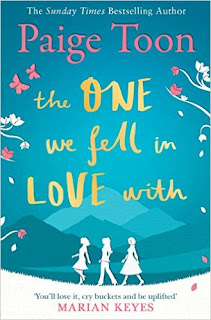 Phoebe is caught between a rock and a hard place. Settle down and get married, or return to the French Alps to pursue her passion? Eliza is in love with someone who is no longer hers. In fact, he probably never was… And her dream of becoming a successful musician seems to be vanishing before her eyes.Rose is out of a job and out of a boyfriend. To make matters worse, she’s been forced to move back in with her mother… But these very different girls have one thing in common. Angus. The one they fell in love with…

I have read a couple of Paige Toon’s books and always enjoyed them so I was excited to read her latest, which I was fortunate to win on Twitter in a competition held by Books And The City, before it was released. The One We Fell In Love With did not disappoint as it is packed with emotion, Tragedy, Love and a whole lot more.

The book tells of triplets Phoebe, Rose and Eliza who fall in love with the guy next door Angus. Although they share the identical DNA and look the same they each display unique traits. Phoebe is strong with leader qualities and quick to stake her claim on Angus. Rose often feels left out and struggles to make a relationship out of the many crushes despite desperately wanting to settle down to have her own family unit. Eliza is closest to Phoebe even though she finds it difficult to come to terms that Angus is with Phoebe and often feels guilt ridden that she cannot shake off these feelings even though she knows in her heart that Phoebe and Gus make the perfect couple. Angus grew on me as at first I wondered if this handsome guy was playing all three girls but as I read more I began to understand him and concluded that he is in fact sensitive and emotional.

I fell in love with all the characters and the story kept me intrigued in discovering how the girls would become close again. Secrets and true feelings are revealed through their personal diaries highlighting jealously and heartache.

Congratulations Paige on producing another terrific book that I didn’t want to put down.

5 Star rating from me.

Thank you once again to Julie for allowing me to guest review.