The Woman who Upped and Left
by
Fiona Gibson
Blog Tour

Forget about having it all. Sometimes you just want to leave it all behind.
Audrey is often seized by the urge to walk out of her house without looking back – but she can’t possibly do that.
She is a single parent. She is needed. She has a job, a home, responsibilities…and a slothful teenage son’s pants to pick up.
But no one likes being taken for granted – Audrey least of all – so the time has come for drastic action. And no one’s going to stand in her way… 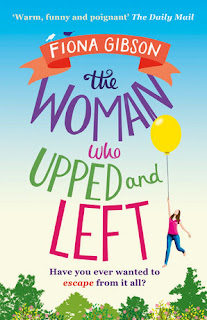 I have read one of Fiona Gibson’s books before, so I know that she tells hilarious stories of family life (especially with teenagers!) so I knew this book would be no different.

Audrey is a single mum living with her 18 year old son Morgan who seems to have his girlfriend permanently attached to his lips! I actually found Morgan so infuriating, I would have to knock some sense into him if he was my son and I did find it very frustrating that Audrey just let his actions go over her head and ended up clearing up after his girlfriend as well!!. When she leaves subtle hints to him about getting a job, he just ignores it and goes to the cupboard looking for food! Personally, I think he took after his Dad as he seemed very laid back about the whole thing as well.

When Audrey wins a competition for Dinner Lady of the year she is overwhelmed with the prize as she could have the choice between a cookery course, a spa retreat or £5000 cash! With times being tough, she goes for the cash but soon changes her mind and thinks of herself for a change (hoorah!!) and decides to go on the cookery course which is a decision that will change her life.

Some very funny parts to this book and also some love interest for Audrey along the way.

Bloggers were asked to cook a dish that was made by Audrey at the cookery school. I was given the recipe of Raspberry Clafoutis, but unfortunately I couldn't get any raspberries this week, but will be making it as soon as I can!!

Below is the recipe you will need to make this dish along with the ingredients. 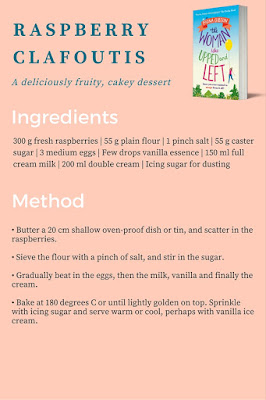