Review of
The Miner's Daughter
by
Jennie Felton 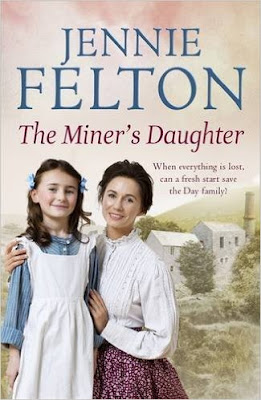 When I first started my blog last year, I read Jennie Felton's first part of the Families of Fairley Terrace Saga "All the Dark Secrets". What a wonderful book it was and it wasn't until I finished the second part today that I read the reviews on the back of the book to see that I had been quoted in it!! I make no secret that I love a family saga and grew up reading the likes of Catherine Cookson, Harry Bowling, Lyn Andrews etc, so when I knew that this series was going to be along those lines, I knew I had to get myself a copy (by hook or by crook!).

This second books starts with Annie who is now married to local preacher Algernon. Annie reached desperate times trying to bring up her two daughters Lucy and Kitty alone after the death of her first husband John in a mining accident. Algernon likes everyone to think he is a pillar of the community at the local church, but nobody knows what goes on behind closed doors.

Lucy is a sweet, kind, caring, but very headstrong girl, who has the singing voice of an angel and after meeting her father's sister Molly, who was once a singer in the music halls, hopes to follow in her footsteps and become a professional. Her step-father Algernon will not hear of it and puts paid to any dreams and plans she may have had by banning the family from having any contact with her Aunt Molly.

Lucy's sister Kitty is quite the opposite to Lucy. She is weak but always scheming against Lucy to get one up on her with Algernon. The author does a great job with Kitty's character, because as much as you want to dislike her, you hope that one day she will come good.....Maybe she will!!

Joe is the son of Algernon's first wife, who he takes in and looks after as he wants everyone to think what a kind person he is! Joe treats Lucy and Kitty as though they are the sisters he never had, until he reaches the age where he actually loves Lucy enough to want to marry her.

Lucy is so headstrong that she cannot see that her dreams will get her in to heaps of trouble, when she secretly goes to sing in a music hall and Algernon finds out. What happens next actually made me gasp in terror and it isn't pleasant reading, but I felt the author described it very sympathetically and even Lucy herself, says that in some ways Algernon's actions made her choose a path which would otherwise have eluded her.

This is a powerful, heart wrenching story of a family ripped apart by grief and lies, but more importantly, a family that remain strong and loyal through some of the darkest of times.

A truly magnificent sequel to All the Dark Secrets, I do hope there is another one on the horizon! Thank you Jennie for such a wonderful read, you have done it again........