It's my turn on the blog tour for Daughters of Paris by Elisabeth Hobbes and I can bring you an extract today. The cover looks absolutely fabulous and from reading the blurb and extract, I will have to get a copy of this one! Enjoy the extract. 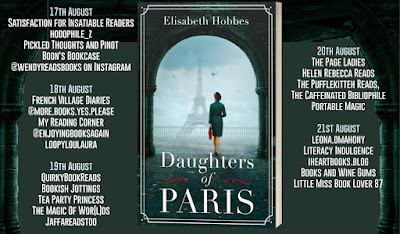 This scene takes place in the autumn of 1938. Colette has been away visiting friends in England for a few months and Fleur has begun working in a bookshop in the Montparnasse area of Paris. Encouraged by Monsieur Ramper, her employer, she has gone out to explore the area on her way home one evening and a café has cought her eye.

‘Mademoiselle?’ A waiter dressed in black with a ruby-coloured apron around his waist approached her. He stared at her through a pair of very thick, round glasses. His light brown hair made Fleur think of an owl.

‘A table for one, or are you meeting somebody?’

‘For one, please,’ she replied. ‘But not too near the band.’

The waiter grinned. ‘Of course. This way, please.’

He escorted Fleur to a small table with two chairs set against the back wall and handed her a menu. He returned a few moments later with a carafe of water and Fleur ordered a café crème, thinking how disapproving Monsieur Ramper would be. One or two of the other patrons looked at Fleur and she smiled back self-consciously. She took a book out of her bag and began reading it, referring occasionally to her English dictionary.

‘What are you reading?’ the waiter asked when he brought the coffee. She showed him the front cover.

The waiter pulled up a chair and sat without asking. ‘You speak English?’

‘A little,’ she admitted with pride. ‘Not enough to read this without a dictionary.’

Fleur took a sip of coffee to delay answering and give herself a chance to observe him. He had a searching face and was probably not much older than she was, though his glasses and a line between his eyebrows – which Fleur was later to discover was the result of a childhood spent squinting at the world without glasses – made him appear older.

‘No, but I enjoy reading and I’m trying to teach myself. I work in the bookshop a few streets away.’

This obviously met with his approval because the waiter held out his hand. ‘I am Sébastien.’

Fleur shook it and told him her name.

‘I am very pleased to meet you, Fleur. I am a student,’ he said proudly. ‘Of art and literature.’

‘And a waiter?’ Fleur asked.

Sébastien’s jaw tightened. ‘I need to eat. The café is owned by my second cousin, Bernard, and he gives me as many shifts as I can manage. I don’t have rich parents like some of them.’

He waved a hand around the room. Fleur looked around. Thanks to living with Delphine, she could tell many of the patrons were wearing quality garments.

‘Forgive me for saying so, but this doesn’t seem like the sort of place where wealthy Parisians would gather.’

His eyes grew hard, and she thought she’d offended him but the corner of his mouth jerked into a quick smile. ‘Very perceptive. Some of them like to pretend they are not rich. Some have rejected families but kept the trappings before they slammed out of the house.’ He leaned in close to Fleur and spoke in a low, drawling voice that made the skin on the back of her neck shiver. ‘See Sabrina over there with the black hair? She had a fight with her father and walked out of an apartment just off the Champs-Élysées but went back the next day to pack three suitcases of shoes, hats and bags.’

‘Naturally. How could anyone survive otherwise?’ Fleur laughed. ‘I should bring my friend Colette here. She would find it remarkable.’

She grew sober at the mention of Colette’s name. She had never replied to Fleur’s letters so she couldn’t really describe Colette as a friend any longer and on consideration, she liked the idea of having something of her own.

Sébastien frowned. ‘If she would view us as a circus or zoo exhibit, don’t bother. I’m afraid I had better get on with work now.’ Sébastien picked up her empty cup and gave the table a quick wipe. ‘I hope we will meet again, Fleur.’

She looked at his smile and her stomach did a slow flip. ‘So do I.’

‘If you come on a Wednesday evening, a few of us gather to discuss … the world. You’d be welcome to join us.’ He’d paused before completing the sentence, leaving Fleur to wonder what aspects of the world they discussed. Somehow, she could not imagine this young man or his friends listening to this discordant noise while they sat and nodded in agreement at government policies. Her scalp prickled with excitement. 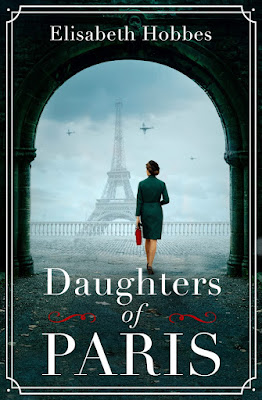 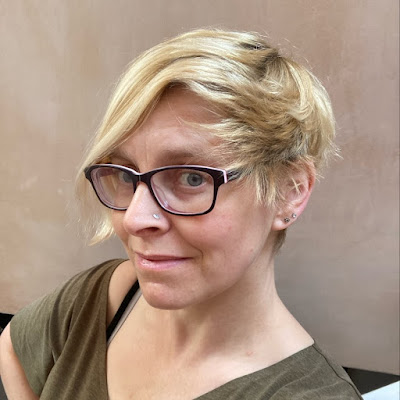 Elisabeth began writing in secret, but when she came third in Harlequin’s So You Think You Can Write contest in 2013, she was offered a two-book contract, and consequently had to admit why the house was such a tip. Elisabeth’s historical romances with Harlequin Mills & Boon and One More Chapter span the Middle Ages to the Second World War and have been Amazon bestsellers and award shortlisted.

Elisabeth is a primary school teacher but she’d rather be writing full time because unlike five-year-olds, her characters generally do what she tells them. When she isn’t writing, she spends most of her spare time reading and is a pro at cooking one-handed while holding a book.

She was born and raised in York but now lives in Cheshire because her car broke down there in 1999 and she never left.