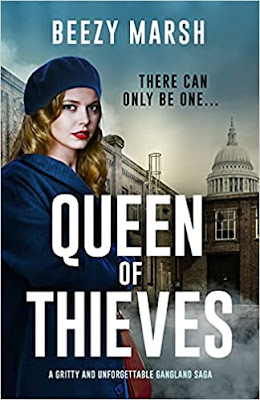 When I very first saw the cover for this book, I just knew I was going to love it! I come from South East London and know a lot of the places mentioned. I am very proud of my heritage and it brings back so many memories reading about the area. There was always "knock off" goods available when you went into pubs, but the story of Alice Diamond is on a whole new level! Below is my review and I know for sure that this is going to be one of my Books of the Year.

Gangland was a man's world - but the women knew differentLondon, 1946.Alice Diamond, the Queen of the Forty Thieves, rules over her gang of hoisters with a bejewelled fist. Nell is a slum girl from Waterloo, hiding a secret pregnancy and facing a desperately uncertain future.Sensing an opportunity to exploit Nell's vulnerabilities, Alice takes her under her wing and, before long, Nell is experiencing the secret world of hoisting, with all the dangers - and glamorous trappings - that comes with this underworld existence.Alice has a longstanding feud with Billy Sullivan's all-male gang in Soho, and thinks Nell could be a useful weapon in her vendetta. But Nell has a secret agenda of her own, and is not to be underestimated. And the more she is exploited by both Alice and Billy, the more her hunger for revenge grows. As she embraces the seedy underbelly of London, will she prevail in carving out her own path to power and riches......and crown herself the Queen of Thieves?

When I very first saw the cover for Queen of Thieves, I added it to my reading wish list as I knew it was going to be a book that I would love and I wasn't wrong!

Alice Diamond (what a name!) is a woman you do not want to get on the wrong side of. She is the ringleader for a gang of women shop lifters (hoisters). She runs her business with an iron rod, well actually, it's a blade, but you get my drift!

Alice is always on the look out for new talent and when she comes across Nell in the pub, she knows she will be an asset to the firm, but Nell is unmarried, pregnant and generally down on her luck. Prime pickings for someone like Alice to bring into the fold and teach her the ways of the Forty Thieves.

Nell may be vulnerable, but she has a spirit that nobody can break, especially Alice Diamond and when she is taken under Alice's wing and taught how to shoplift, she thinks this could be the beginning of a career path that could make her fortune.

Poor Nell is at her lowest ebb, having found herself pregnant with Jimmy's baby. She loves Jimmy dearly, but he just doesn't show her the commitment she craves and as for having to tell her parents that she is pregnant, that just doesn't bear thinking about, but as she is starting to show, it's something she will have to do sooner rather than later.

Alice has a rival by the name of Billy Sullivan and when she sends Nell to work for him in his club in Soho to spy on him and report back to her what he is up to, little did she know that she would be fighting for her own survival as top dog in gangland London...

This is an absolute corker of a book. The characters are relatable and some you love and some you don't! I think this is just the beginning for Alice and Nell and I am keeping everything crossed that there will be a sequel because the ending was just brilliant!

Thank you Beezy for a wonderful insight into what was a true part of London's post war gangland and I really would love to read more about the women hoisters of London Town!