In the Bleak Midwinter by Carol Rivers 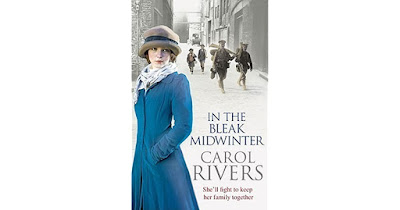 THIS CHRISTMAS, SHE'LL FIGHT TO KEEP HER FAMILY TOGETHER

1919. Two months after the Armistice that ended the Great War, life in London's East End is slowly returning to normal. But for 25-year-old Birdie Connor, the battle is only just beginning . . . Frank, Birdie's older brother, has been sent to prison for deserting his army post whilst fighting in Belgium, and the shame heaped on the Connor family by their neighbours is unrelenting. Wilfred, Birdie's widowed father, has disowned Frank and vows that he will never set eyes on his son again, but Birdie cannot believe that her brother is guilty When Frank escapes from prison and comes to find Birdie in secret, she promises to help him and is determined to prove his innocence. But little does she realise that she is exposing herself to danger as Frank gets himself deeper and deeper into trouble. Helped by the Connors' lodger, the handsome Harry Chambers, will Birdie be able to find the proof that Frank needs in time to reconcile him to their frail father before it is too late? And can she build a future to keep herself and her younger brother, Patrick, safe?

Birdie is trying to keep everything together since her mother died after having her brother Pat. Her father Wilfred is coughing so much it is now causing him to have seizures, but won’t go to the doctor. Her brother Frank is in prison having been accused of desertion during the war.

One evening she looks out of the kitchen window when she thinks she sees a shadow in the yard. When she goes outside a hand is put over her mouth to stop her screaming, but she hears Frank’s voice in her ear.

When she speaks to him he tells her that he has escaped from prison to try to get to France to prove his innocence as he didn’t desert his post.

Birdie tries to go on doing her day to day chores by dressmaking to earn a living and dreaming of the day she marries her fiancé Don.

Don and his mother run a local shop which is neither clean or value for money. His mother Aggie is always trying to save a few pennies and thinks nothing of ripping off the customers with food that is well past its’ sell-by-date!

Birdie comes from a very strict Irish catholic family and dreams of having the big white wedding in the local catholic church, as does her father because he knows it was her mother’s wish, but Don and his mother have other ideas and think a quick register office “do” with some sandwiches after will do the trick – all in good time to open the shop again in the afternoon!

Meanwhile Frank gets involved with some undesirables who are hiding him away, but are they doing it for the right reasons?

Bridie confides in her friend Flo about her upcoming marriage to Don, but she doesn’t think he is worthy of her and tries to make her see sense.

Harry is Bridie’s lodger and when she tells him of Frank’s predicament, he is more than happy to help her find him to declare his innocence, but does he have an ulterior motive to be near to Bridie?

I have read many of Carol River’s books and this is up there with the best. It has everything you need from a wartime saga including love, loss, happiness, sadness and everything else in between!

A great read for any saga lover.