The Forgotten Life of Arthur Pettinger

I am delighted to be a part of the blog tour for this author. Today I have an extract for you, but I hope to review the book for you as soon as I can. 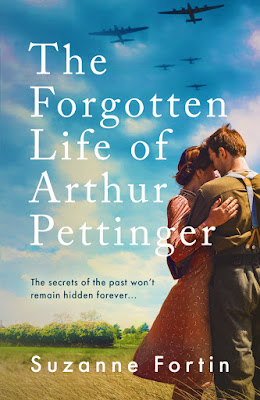 The grave tones of Neville Chamberlain and the crackle of the radio filled the sitting room.

‘…and that consequently, this country is at war with Germany.’

‘Bloody hell,’ said Arthur. ‘Chamberlain has only gone and done it.’

‘Do not use such language, Arthur,’ scolded Helena Pettinger, her French accent always stronger when she was cross. She raised her eyebrows in reproach at her son.

‘I do not care how old he is, I will not have that language in my house. War or no war.’ Helena gave her husband an even harder glare.

‘What’s going to happen now?’ asked Arthur, to defuse the confrontation. No one wanted to rile his mother. She may have left her native France at the age of eighteen to live and work in England, but her Gallic temperament had most definitely come with her. ‘What about John?’

Reg Pettinger returned to polishing his shoe. ‘Nothing probably. It’s all bluff. Brinkmanship. You mark my words; it will all be over this time next week. John will be all right. Besides, it’s his job.’

Arthur couldn’t help feeling a little disappointed at his father’s prediction. His older brother John was already serving in the army and from what John had said during his last trip home, it sounded like it was going to be a bit more than just a petty argument. John had told his younger brother all about how they had been preparing for war in the regiment and what they would have to do.

To Arthur, it sounded exciting. Much better than being stuck on the farm, ploughing the fields, stacking hay bales, feeding the cows, blah, blah, blah. How many times had he sat on that tractor and wished he was doing what his brother was doing? And it pissed him off that he had been left helping his folks on the farm. He didn’t want to be a farmer but last in line to the throne at Holly Tree Farm had meant the honours had fallen to him. If only he’d been born the eldest, then he’d be the one dressed in that smart uniform, marching with his regiment, preparing for war, preparing for excitement.

‘I can’t wait until I’m old enough to join,’ said Arthur. ‘Did you hear that Pip Nelson is going to refuse to sign up. Conscientious objector.’

‘He should be ashamed of himself,’ said Reg. ‘Anyway, he’ll end up going to a tribunal and I’ll bet a week’s wages, they’ll overrule it and he’ll still have to go or face a stint behind bars.’

‘Of course, if there were medical grounds…’ began Helena.

Her husband cut her off. ‘Don’t go putting such ideas into the lad’s head. There’s nothing wrong with Arthur.’

Helena looked down at the tea towel in her hands and fiddled with the corner. Arthur could feel the angst she was holding in. She’d been distraught enough when John had joined the army before

war was even on the cards, so Arthur was well aware of her feelings about him joining now war was a certainty.

‘Don’t worry, Mum,’ said Arthur in an attempt to reassure her. ‘I’ll be all right.’