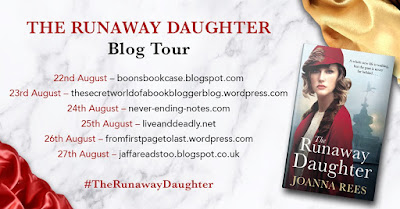 I must apologise for getting my dates mixed up with this blog tour, so a few days later than planned, I have an extract for you from The Runaway Daughter by Joanna Rees. I am currently reading this and will review as soon as I have finished.

Extract
1) Inventing Miss Casey
The shrill whistle woke her. For a second she didn’t move, feeling the rattle of the steam train jolting her as she remembered her midnight flight across the moonlit field. How she’d spotted the stationary train impatiently puffing silvery clouds into the night air, how she’d managed to prize open the wooden carriage door with her shaking fingers and how she’d curled up in a tiny space behind the industrial cargo and packing boxes from the mill. How the exhaustion and terror had transported her to blackness.
Now her legs were stiff and her cheek was sore from where she’d been leaning against the cold metal machinery. And she was cold. So very cold. Her teeth chattered as she shivered in the icy air. She had that same fluttering feeling she’d had when she’d fallen asleep, as if the fear were darting around inside her, like the birds in her mother’s aviary.
How long since they’d last stopped? How far till she was far enough away?
Would she ever be far enough away?
She thought of the drama that was bound to be unfolding by now. She imagined her parents’ drawn faces when they discovered Clement’s body in the stable . . . her mother’s muffled scream.
Would they even be thinking of their daughter? Would they have noticed her absence yet? Probably not, she thought bitterly. Her mother had always been a muddled, ethereal presence – prone to lengthy bouts of illness, and concerned only with her birds and her absolute insistence on quiet. Her father, on the other hand, had always been as tempestuous as her mother had been timid, and he’d made it perfectly clear that Anna, like her mother, had always been an irritation to him. Lower down on his pecking order than the dogs.
Perhaps, though, her parents had drawn the correct conclusion straight away. Helped, no doubt, by Mark, the stablehand. He’d never liked her and she had no doubt that he’d readily describe how he’d seen her running for her life. And if he had, then the police were bound to have been called. Perhaps they were already chasing her . . .
Again, she fought down the fluttering fear. She’d got away, hadn’t she? She’d escaped.