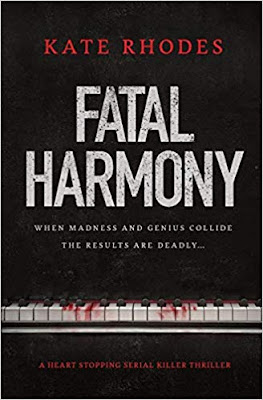 Adrian Stone believes he is a genius. A narcissist, with a psychotic desire to pursue his ambition to become the world’s most revered pianist, Stone joined London’s Royal College of Music as a child prodigy, believing his path to fame was secure. But when his parents decided to send him back to school, he slaughtered them and his older sister in their Richmond home, landing himself in Rampton’s high-security unit.

Nine years later Stone escapes with two goals in mind: to kill those who denied his destiny and pursue his musical ambitions.

As bodies start to appear around London Dr Alice Quentin is brought in from the Met’s Forensic Psychology Unit. But when she realises her name is on Stone’s list of potential victims, the case becomes personal.

Working alongside her boyfriend, DI Don Burns, London’s most successful murder investigator, Alice must stop Stone to save her own life.

Alice realises that there is logic to the music left at each murder scene, and thinks she’s cracked the case, but little does she know what Stone has in store for his grand finale…

Review
This is book 6 in the Alice Quentin series and I really can't get enough of them!

Alice is brought in to try to catch serial killer Adrian Stone before he kills anymore people, but as he is leaving such intelligent clues in the form of sheet music and other clues, it is taking longer to work out where he will strike next, but Alice must work out the formula before anyone else is killed, but Adrian always seems to be one step ahead of her. Will Alice work out how to stop Adrian before his clues lead to her own demise as she is convinced he will come after her in revenge for when he was an inpatient in Rampton high security unit.

Alice's boyfriend, DI Don Burns, is also on the case, but he has other things on his mind and Alice's safety is paramount.

This is a fascinating novel that is so cleverly thought through and obviously a lot of detail has gone into the research of this book.

Thank you once again Kate for a wonderful book. I can't praise your Alice Quentin books enough and I really do hope that we are in for another instalment in the not too distant future because I start getting withdrawal symptoms after a while!


To order a copy of Fatal Harmony from Amazon click here