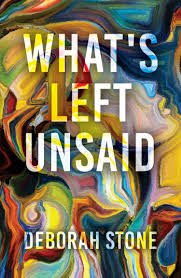 I would like to say thank you to the author for getting in touch with me and asking, very kindly, if I would like to review her book. I'm glad she did as I really enjoyed this one! Read my review of What's Left Unsaid below.

Sasha is just about managing to hold her life together. She is raising her teenage son Zac, coping with an absent husband and caring for her ageing, temperamental and alcoholic mother, as well as holding down her own job. But when Zac begins to suspect that he has a secret sibling, Sasha realises that she must relive the events of a devastating night which she has done her best to forget for the past nineteen years.

Sasha's mother, Annie, is old and finds it difficult to distinguish between past and present and between truth and lies. As Annie sinks deeper back into her past, she revisits the key events in her life which have shaped her emotionally. Through it all, she remains convinced that her dead husband Joe is watching and waiting for her. But there's one thing she never told him, and as painful as it is for her to admit the truth, Annie is determined to go to Joe with a guilt-free conscience.

As the plot unfurls, traumas are revealed and lies uncovered, revealing long-buried secrets which are at the root of Annie and Sasha's fractious relationship.

I was very kindly asked by the author if I would like to review this book and after reading the blurb, how could I refuse!


Sasha is married to Jeremy and they have a teenage son Zac. Sasha believes she has the typical "normal" marriage and family life, dealing with a husband who goes away for work much of the time, a teenage son who doesn’t know the meaning of the word Co-operation! The only one who seems to take any notice of her is Stanley, the dog.


Sasha’s Dad, Joe, died a few years previously, but tells part of the story in this book, which I felt was a really good touch and made a change!


Annie is Sasha’s Mum and Joe’s wife, who is sadly in the final stages of her life, but having spent much of it a heavy drinker, is paying the price and unfortunately this is affecting her memory as well.


When Zac comes home from school one day and confronts his mother about his feelings that he isn’t an only child, Sasha’s head starts to spin from this shock announcement. Where on earth did he get this information from and even more importantly, is it true?...


Zac isn’t convinced by his mother’s answer to his question and decides to get a film made where his family are interviewed about their lives. This idea goes down like a lead balloon but Zac is adamant he wants to find out about his family history. Surely this can only lead to skeletons coming well and truly out of the closet!


I really enjoyed this book and what I loved was the way the chapters involved Sasha’s Dad who had died, but still told some of the story. Very cleverly thought out.


A great mix of characters and when a character gets under your skin for all the wrong reasons, I do believe that is the work of a great writer! I found Sasha to be a bit weak at first, but she certainly came back fighting after events could have made her turn in a completely different direction!


I would certainly read work from this author again and would again like to thank her for asking me to review for her.