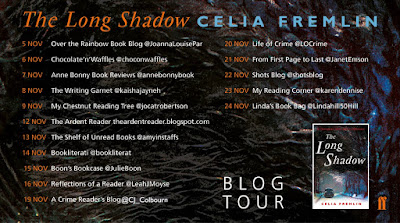 It's my turn on the Blog Tour for The Long Shadow and today I have an extract for you. I love the cover on this one and having read some of this book already, I can see the similarities to Susan Hill's The Woman in Black. Enjoy the extract from this seasonal ghost story...

Extract
It was the grandfather clock striking midnight that roused her. She should be writing answers to these letters, not crying over them. In two whole months, she and Dot between them had answered barely a third; and they were still coming in.
‘Ten a day,’ Dot had proposed, in the heavy-handed, no-non-sense style that had kept her husband working late for years. ‘If we each answer ten a day, Imogen, then they’ll be done in— let’s see. Twenty a day is a hundred and forty a week . . . that’s a month, then. Just over a month . . . .’
Soon, though, it began to appear that five a day might have been a more realistic target . . . then three . . . and then two; and at this point the actuarial calculations became so depressing— the whole thing extending, it seemed, over the best part of both their lifetimes—that Dot decided that what was needed was a System. Hence the in-trays, and the cardboard boxes, and the slips of paper saying things like ‘To be answered before Dec. 7th’; or ‘Friends, current’; ‘Friends, Miscellaneous’; ‘Publishers etc., except for Charlie’; and ‘The Australian Lot’. Imogen found the principle of classification beyond her; but she could see that it was easier than actually writing the letters.

In the last resort, there is only one way of getting something done, and that is to do it. This was something you couldn’t really explain to Dot. She took after her mother, Ivor always used to say; which may or may not have been true. In all these years, Imogen had never actually met this earliest one of her predecessors, and so these paternal accusations were hard to assess.
Rubbing her eyes, still stiff and sore with crying, Imogen reached out blindly for the topmost letter of the nearest pile. ‘Take the one nearest you’, they always used to say when you were a child at the tea-table; and really it was good advice. Whatever this topmost letter was, important or unimportant, easy or difficult, urgent or otherwise, she would answer it—just simply answer it—here and now. Thus would be removed the awful burden of deciding where to start.
*
It would be this one! Well, wouldn’t it?—and no more than you deserve, my girl, leaving the thing to Fate like that. And you the wife of a Classics Professor, too—all those Greek plays. You, of all women, should know the kind of thing Fate gets up to when the Gods are no longer on your side . . . .
The widow of a Classics Professor, she corrected herself; and began to read. Twice, and then a third time, she read through the five closely-written pages; and then stared, for nearly a minute, at the heavy velvet curtains that shut out the night beyond the big windows.
At last, drawing the writing-pad towards her, she picked up her pen.