The Girl I Used To Know
by
Faith Hogan
BLOG TOUR 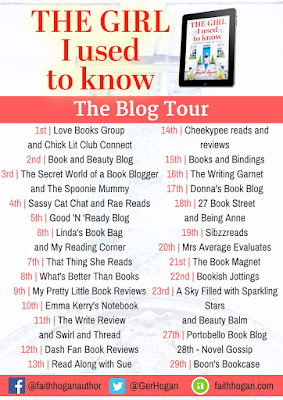 I was delighted to be asked by the author to be a part of the Blog Tour for her new book, The Girl I Used To Know. I hope you enjoy the extract below and judging by the gorgeous cover, I'm sure it's going to be a corker! Enjoy.

THE GIRL I USED TO KNOW by Faith Hogan 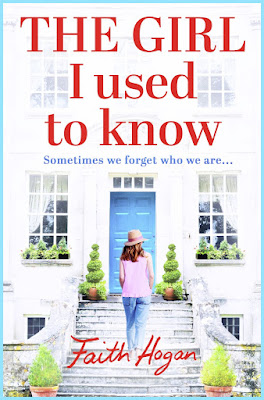 
A beautiful, emotive and spell-binding story of two women who find friendship and second chances when they least expect it. Perfect for the fans of Patricia Scanlan.
Amanda King and Tess Cuffe are strangers who share the same Georgian house, but their lives couldn't be more different.
Amanda seems to have it all, absolute perfection. She projects all the accoutrements of a lady who lunches. Sadly, the reality is a soulless home, an unfaithful husband and a very lonely heart.
By comparison, in the basement flat, unwanted tenant Tess has spent a lifetime hiding and shutting her heart to love.
It takes a bossy doctor, a handsome gardener, a pushy teenager and an abandoned cat to show these two women that sometimes letting go is the first step to moving forward and new friendships can come from the most unlikely situations. 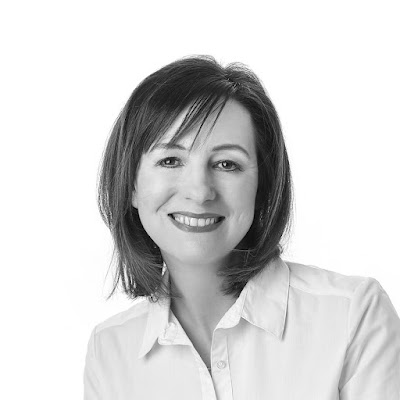 Faith Hogan was born in Ireland.  She gained an Honours Degree in English Literature and Psychology from Dublin City University and a Postgraduate Degree from University College, Galway.  She has worked as a fashion model, an event’s organiser and in the intellectual disability and mental health sector.
She was a winner in the 2014 Irish Writers Centre Novel Fair – an international competition for emerging writers.

The city bells woke her at midnight. New Year’s Eve. Well, this was a first. She’d never spent it in hospital before. Looking on the bright side, it turned out, she was not alone for the ringing in of the new, even if her company were all old biddies snoring loudly and unaware that they had made it into the next year, albeit, if from the sounds of some of them, it could be their last.
Tess yanked herself up higher in the bed. She looked out across the Dublin rooftops. It was surreal to see the city so quiet, and as if on cue, a loud bang heralded the start of a twenty minute fireworks’ display. She had never watched the festivities before. Usually, Tess made sure she was fast asleep before people could get too nostalgic. Anyway, she was a morning person – liked to get a start at the day.
Now, watching each exploding colour bomb hit the inky sky, she regretted missing them over the years. They really were quite beautiful. Intoxicating.
She heard the thrum of modern loud music and the roars and claps from the city dwellers when the last golden burst faded into the smoky black night. Then, the oddest thing, she started to cry. This was not a raging upset, but more of a slow-releasing sadness at how her life had turned out. She was truly alone – not a friend to call on her over the Christmas holidays. No one missed her for ten whole days. At the various offices around the city, she’d temped in on and off for the last few years, they hadn’t even sent a card or enquired how she was when she returned. Her wages just arrived in her bank account. Ten days she’d not turned up. The agency had just replaced her – and nobody had noticed anything different. She was an old woman now. She was only sixty-six, which was nothing these days. Women her age were winning marathons, running countries, and doing all sorts of marvellous things all over the world. She was younger than Meryl Streep for God’s sake. Tess knew, though, that those women were not like her. They had young hearts, souls that sang with love and joy. It was many years since Tess had known what it was to be moved by passion for something that filled her soul. These last few weeks, she realised that she was, to all extents, invisible – could it be that she had allowed herself to become sidelined in her own life? That seemed neither possible nor practical, and yet, it had become an overwhelming sense within her. No one noticed if she didn’t turn up, apart from the plants that she watered each day, because if she didn’t, she believed no one else would. She temped in offices throughout the heart of the business centre in
Dublin. Tidied up the mess left behind by the bright young things that couldn’t quite manage to get their work completed. She found it mind-numbingly dull, of course, but she had shown up and for too many years to count, it was all she had to push her into each new day.
In this moment, Tess, all alone in the world, knew that it had been too long since she had loved. It was two score and more since she felt the kind of joy that she knew with certainty was still outside that window tonight.
What if it wasn’t too late to change things? She considered herself a brave and resilient woman; was she courageous enough to turn things around, if there was time? And how on earth would she go about it? It was time to take a good hard look at her life.
In the near silence of the hospital ward, the only punctuating sounds were easily drowned to quiet when Tess began to sit up and think. This unease, this gulf that had become her whole existence, wasn’t just about taking stock of herself, it was her health, her happiness. Could she honestly move forward if she didn’t first resolve the harm done in the past?
God, Tess shuddered. She couldn’t go back.
There was Nancy, the sister that she’d treasured. Her parents, long dead now, she never really said goodbye. And then, of course, there was Douglas, the man she had so prized, all those years ago. It was a love that cost too much in the end. Should she have let it steal her life away? That thought jolted her now, or was it the sound of some buzzer, muted and unending far off, letting nurses know that they were needed once again? Tess knew, with the certainty of time and sudden blinding clarity, that was what she’d done. She’d allowed life to slip through her fingers, just a little with each passing year, until the gossamers of time had pulled so finally away that it was almost too late to make anything of what was left.
How could someone who started with so much have ended up with so little in life? Tess had an uncomfortable feeling that learning the truth of this might be the only way to make a life that was worth something more than another decade of loneliness.
Tess knew with certainty, in this moment, surrounded by women who were much older than she was, they would give their false teeth to have another ten years before them. She should have that, and surely, if she had, then she just had to try to make things up?
Posted by Boon's Bookcase at 07:00