I'm absolutely delighted to host the Blog Tour for Penhaligon's Pride by Terri Nixon here on Boon's Bookcase. I also have a Q&A with the author for you. I have been lucky enough to meet Terri and have had a lot of interaction on Facebook and she is such a lovely, funny and down to earth lady and when I saw the opportunity to host her new book, I jumped at the chance! So welcome Terri and I hope you enjoy the extract, Q&A and Giveaway! 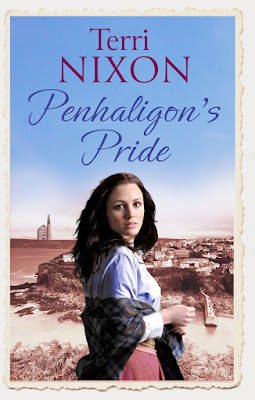 Blurb
1910. Anna Garvey and her daughter are still running the Tin Streamer's Arms in Caernoweth, Cornwall, and it finally seems like she has left her tumultuous history behind in Ireland. Meanwhile Freya Penhaligon has blossomed and is now the object of increasing affection of Hugh, the elder son of the wealthy Batten family.
After the dramatic events of the previous months, it feels like everything is finally getting back to normal. But when Anna inadvertently reveals something she shouldn't, she finds herself at the centre of a blackmail plot and it seems like the past she longed to escape is coming back to haunt her. To make matters worse, the tiny fishing hamlet is battered by a terrible storm and shifting relationships find themselves under more scrutiny than ever before.
With the Penhaligon family at breaking point it will take enormous strength and courage to bring them back together - but is it already too late?

Hi. Thank you so much for agreeing to answer some questions on my blog about your writing.

Firstly, please could you tell readers a little about yourself?
Hello! Thank you for having me here today. Briefly then, I’m a hybrid author, writing historical sagas for traditional publishers, but self-publishing my own spin on contemporary folklore. I live in Devon, and grew up in Cornwall, on the edge of the moors – which was as wonderful as it sounds! (And probably explains that folklore thing!)

When did you first realise you wanted to be a writer?
This is always a tough question to answer, because while I’ve always known I wanted to write, I used to try and convince myself that meant I should be looking for a job as a journalist, or just to work with books in some way. It was only when I was in my early twenties that I dared to think I might try and actually ‘be’ a writer. At school I used to write ‘fan fiction’ for my friends, putting them with the boys they fancied!

What did you do as a job before becoming a writer?
Sadly I’m still doing it! I work full-time in the faculty office in a university, and before that I did twenty years or so in the civil service. I’d love to be able to give up at least a couple of days, but needs must when the devil’s your bank manager.

How do you carry out the research for your novels?
I read. A lot! I try to read mostly first-hand accounts of people from the era I’m writing about, to try and develop an authentic-sounding voice. I find that’s far more valuable than learning facts – you absorb so much more than you realise, and find it leaking out gradually and more naturally. I think you can tell when someone’s been on a fact-finding mission and is determined to let you know everything they’ve learned!

Which aspects of your writing do you find easiest and most difficult?
Dialogue – particularly arguments, or verbal conflict – I absolutely love. I can get swept right up in both sides once I get started, and often emerge a bit blinky, and not quite sure what’s happened until I read it back! I’ve changed massive plotlines and character arcs based on something that’s popped out while writing a massive row! More difficult, is making sure all my loose ends are tied up; I write series, so I’ll have dropped all kinds of hints, foreshadowing, and clues, then powered through and forgotten I’ve sowed all those seeds. Time for a tidy-up!

What are your writing routines and where do you do most of your writing?
Because of my job I’m restricted to weekends for actual writing, though I can use the odd hour or so in an evening for a bit of editing, or plotting. But I write best when I begin early in the morning, so Saturday and Sunday you’ll find me planted at my bureau, trying to ignore the washing up. I’m getting pretty good at that…

When you're not writing, what do you like to read?
I’m a long-time rabid Stephen King fan, and I also love the novels of Walter Scott. Wildly romantic, in all its definitions. Been a fan of Diana Gabaldon’s books for years and years too, and for humour it has to be Tom Sharpe or Terry Pratchett.

How important do you think social media is to authors in today's society?
Crazy-important! You don’t have to like it, but you’ll be putting yourself at a disadvantage if you decide to avoid it. I’ve heard writers dismissing it as unnecessary, and those will be the ones who complain the loudest that it’s impossible to get their work or their name noticed. A connection with people you’re writing for, as well as a support network of people who ‘get it,’ is vital.

Could you tell the readers a bit about your latest book?
Penhaligon’s Pride is the second book in my Cornish series: The Penhaligon Saga. Set in a mining and fishing town in the early years of the 1900s, it focuses on family and friendship, and follows the lives ofa community of people living and working in dangerous occupations. The central family have secrets and regrets, but they’re close, and when something threatens the deep trust between them it’s hard to imagine how they can recover from that. Add in a potentially fatal explosion in the tin mine, a body found floating face-down in the quarry pool, and a ferocious coastal storm, and there’s quite a lot going on in this book!

Which of your characters would you most like to be and why?
Ooh, tough one! I don’t think any of them escape having a bit of a hard time now and again – some more than others – but nearly all of them also have times of great joy and contentment. I think, at this moment, I’d pick Lizzy Parker from Maid of Oaklands Manor… without giving too much away, I think she’s destined for an unpredictable and exciting life, with a very exciting companion!

Is there anything else you would have liked to be asked?
I would like to use this space to extend my thanks to all the wonderful bloggers and readers who have taken the time to review my work, or to help me bring it to the attention of those I might otherwise have missed. It’s SO deeply appreciated, and I just wanted to let you know that. Thank you all. And Merry Christmas!

Thank you so much for your time in answering my questions.


(Matthew Penhaligon is working in the tin mine, and his old adversary David Donithorn, his shift captain, has been uncharacteristically distant all morning. The men are on their lunch break.) 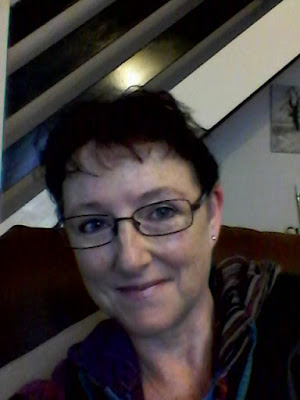 Terri was born in Plymouth, UK. At the age of 9 she moved with her family to Cornwall, to the village featured in Jamaica Inn -- North Hill -- where she discovered a love of writing that has stayed with her ever since. She also discovered apple-scrumping, and how to jump out of a hayloft without breaking any bones, but no-one's ever offered to pay her for doing those. Since publishing in paperback for the first time in 2002, Terri has appeared in both print and online fiction collections, and is proud to have contributed to the Shirley Jackson award-nominated hardback collection: Bound for Evil, by Dead Letter Press. Penhaligon’s Pride is her eighth novel to be published. Terri also writes under the name T Nixon, and has contributed to anthologies under the names Terri Pine and Teresa Nixon. She is represented by the Kate Nash Literary Agency. She now lives in Plymouth with her youngest son, and works in the Faculty of Arts and Humanities at Plymouth University, where she is constantly baffled by the number of students who don't possess pens.