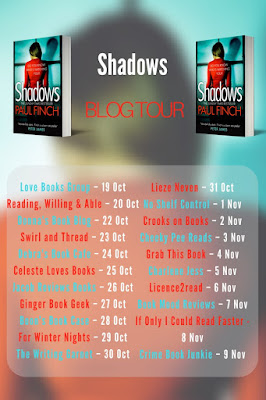 I'm extremely privileged to have a Guest Post from the author Paul Finch today as part of the Blog Tour for his new book Shadows. I was lucky enough to meet Paul last year and he is such a lovely man (and very funny!). I have to hold my hands up and admit that I haven't read any of his books yet, but in my defence, it is only because my husband pinches them from me before I can read them!! Maybe I should get him to do a review!! Enjoy the Guest Post from Paul Finch and the rest of the Blog Tour for Shadows. 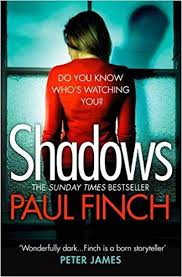 GETTING INTO THE ZONE

One question I’m often asked about my writing, and yet which is still one of the hardest to answer, is – how do I get into ‘the Zone’?

What I guess this means is, when I wake up in the morning in our – now that the kids have left – fairly quiet family home, head downstairs to have breakfast with my wife, Cathy, before she departs for her office up the road, and then re-ascend to my own office at the top of the stairs, how do I make the sudden switch from that very suburban, very sedate lifestyle into the dark, hard-hitting world of cops like Heck and Lucy Clayburn, who invariably are pursuing psychopaths in the most woe-begotten corners of the deep urban sprawl?

If I’ve made it sound difficult, I don’t apologise for that. I’d like to be able to say there is a tried and tested method, but that would be a lie.

A lot of the time, we writers, particularly those of us who follow the darker path, have simply got to root it out of our imagination, to forget our safe everyday lives and drag our mental selves kicking and screaming into Hells of our own creation.

Perhaps this is partly what they mean when they say there is a thin line between creativity and madness.

It’s also the case, of course, that most of us were not born into tranquil lifestyles and only became writers after doing real jobs. I, for example, was originally a cop and a journalist. I think it’s fair to say that probably everyone on the planet has experienced some darkness in their lives, and it’s a nice thought that, in later years, when/if you’ve managed to get over it, whatever residue left is available for you to plunder and profit from (if you can face doing that).

But if that doesn’t always work for me, I have other processes.

First of all, as an author I’m never really off-duty. Wherever I am, day or night, whether I’m lying in bed, reading a book, watching television, swimming, hiking, working out at the gym, or even relaxing at a social gathering, listening to friends talk, I’m on the alert for inspiration; literally anything – an offhand idea, a stray thought, an inane piece of chit-chat – that I might use to get the productive juices flowing.

I suppose the result of this is that I’m never completely out of the so-called Zone, always half-embroiled in the turbulent worlds of my fictional heroes and heroines.

But there are other things I do as well.

People who follow the twice-a-month chop philosophy that I post on my blog, will probably know by now that I often dictate my first drafts, usually whilst walking my dogs and blabbing endlessly into a Dictaphone. But there are occasions when getting out there onto the roads or into the countryside also helps me to brainstorm rather than simply write. In this regard, living in the
Northwest of England has its advantages, because we have infamously terrible weather; for all but a couple of months in summer – and sometimes even then – grim, grey skies arch overhead, it is cold, wet, misty and desolate. But walking out in those inclement conditions can be very useful, especially if you’re looking to put yourself into a Zone where doom and gloom reign.

Similarly, a lot of my books and stories tend to focus on blighted places, be they run-down corners of town, urban wastelands, or wintry woods where the leafless fingers of skeletal trees rattle on the broken, mossy relics of ruined industrial architecture.

Devil’s Bridge, for example, is ten minutes’ walk from my house, and a notoriously eerie, allegedly haunted railway bridge, comprising rotted masonry overhead and dripping blackness under the arches below. Then there is Grendel’s Pond, a flash or lodge as we used to call them, an area of colliery subsidence where the surface of the land has sunk into the derelict abysses below, the resulting sinkhole now filled to the brim with yellowish, noxious water. If the legend that calls it bottomless is a tall tale, you can be sure of one thing: it is deep and deadly.

Oh yes. If you’re looking to invoke an atmosphere of menace and dread, you can’t do better than wander around shunned places like this, preferbly on dark and stormy days.

Okay, maybe this isn’t particularly helpful, because I know that not everyone reading this and wanting to write a scary book is likely to have access to Devil’s Bridge or Grendel’s Pond. But you won’t have to look too hard to find places like that; more than likely, there’ll be somewhere in your own neighbourhood – some abandoned, neglected spot, where if evil legends aren’t already circulating, you can easily supply some of your own.

Of course, not everyone wants to go out in the rain, or expose themselves to potential real-life danger by straying off the beaten track to explore ruins and darkness. For those of you who’d rather get into the Zone from the comfort of your own armchair, I have another method.

Construct yourself a dedicated play-list for each and every mood you are looking to invoke. For example, whenever I’m writing Heck or Lucy Clayburn, there are three main atmospheres I seek.

First of all, perhaps most obviously because these are thrillers, I want my readers to know that we are dealing with the criminal underworld. So, I’ve put together a several-hours-long playlist of themes and incidental music from classic movies and TV shows where the emphasis is on crime. This may not work for everyone, but if I’m writing about cops striking sparks off each other in bustling urban police stations, or chasing hoodlums through the neon-lit chaos of the city centre, it helps to put me right there.

Secondly, it’s a big thing in my novels to create suspense and fear. I like my guys to be on edge near enough all the time – and by that, I mean my readers as well as my characters. There are no run-of-the-mill crimes in my books, no banal loser-idiot villains. The opposition is never less than terrifying, the situations as disturbing as possible. So, I’m often looking for horror themes as
well (and I don’t just go for the big, brash, over-the-top ones here; where the fear-factor lurks, subtle is always good).

The third tone I’m often looking for is that of the hero (which can be particuarly challenging given the placid lifestyle I these days lead). For this, I delve into the annals of rock. Hard rock primarily, as it tends to have more oomph about it. But anything will do so long as it can rouse the human spirit and provide a blue touch-paper to attitudes of fearlessness and defiance, but also to deep and genuine emotion, because all our heroes have to be lovers as well as fighters – they simply must, or they’ll have no human depth.

I reiterate that these methods are my own, and that they work well for me. But there’s no guarantee that they’ll work for everyone else. I suppose that like everything in writing, there are some advantages you simply must acquire for yourself by whatever means you have.