The Woman Who Met her Match
by
Fiona Gibson
Blog Tour 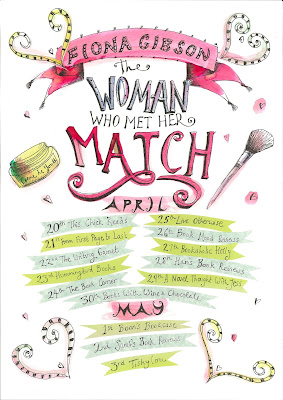 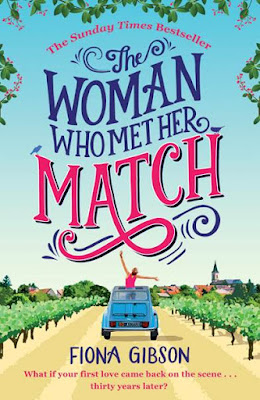 ‘Well, I hope I look as good as you do when these two are teenagers. But then, I bet you never let yourself go, even when yours were babies . . .’

‘Oh, I did,’ I say truthfully. In fact, I remember there were periods when the kids were well beyond babyhood and the very idea of putting on a face to greet the outside world was furthest from my mind. Of course, I don’t tell Jane that, after I lost David, my hair didn’t see a brush for days on end. It didn’t occur to me to look in a mirror, and I only got dressed because friends urged me to.

David and I had been together for fifteen years – we’d never married, we simply hadn’t felt the need – and I had forgotten how to be without him. After the accident, it was the children who literally kept me going. For them, I had to get out of bed every morning because ordinary life didn’t stop. I was a lone parent now, ferrying them to and from Scouts and judo (Amy’s short-lived obsession) and basketball (still her favourite thing in life). I turned up at school concerts – Amy sang in the choir, and Cam briefly flirted with the French horn – and parents’ evenings alone, one of the kinder teachers always making the effort to come over and say, ‘How are you, Lorrie? I know it’s been a difficult time.’

Yes it was – because David was dead. I mean really dead, not a Belinda’s-gone-to-Halifax scenario. It happened on one of those rare winter’s nights when London is properly blanketed in snow, like in a children’s story. We were happily cosied up for the evening in the house we still live in – 120 Pine Street, London E2, an ordinary little terrace made a little less ordinary by the original outdoor wooden shutters at the living room windows. With Cam and Amy in bed, David and I were looking out at the snowflakes falling slowly, illuminated by street lamps. ‘Fancy some wine?’ I asked, and David said yes, and because I was already in PJs he pulled on his thick padded jacket and a woollen beanie and headed out to the 7-eleven. Ever obliging, that’s what he was like. Not a pushover – he knew his own mind, taught English in a challenging North London secondary school and took no nonsense from the kids there – but nicely old-fashioned in that he was willing to go out and buy wine, because I fancied a drink.

Because I wanted it, not him. Because I was worn out from a long week of working and being Mummy, and longed for a glass of something cool and chilled.

If I’d put on the kettle and had a mug of tea, it would never have happened.

If I hadn’t been such a greedy wine-guzzling lush, it would never have happened.

If I hadn’t had a bath after cajoling the kids into bed – and still been in jeans and a sweater rather than PJs – then maybe I’d have nipped out to the shop, and he’d still be with us now.

I try to push away such thoughts and pause to study Jane’s face. She seems to have fallen into a sort of reverie. Choosing a neutral pinky-brown pencil, I outline her full lips, then apply a semi-sheer lipstick with a brush. Archie is now drawing thick round spectacles on the lady with the terrible skin condition in the colouring book.

The off-licence is only a five-minute walk away from our house, around the corner and down towards the Roman Road. And that’s where it happened, just as David turned the corner, the car coming too fast on freshly fallen snow, skidding and slamming into him. And that was the end.

I brush on a little pinkish blusher, followed by trans­lucent powder. ‘All done,’ I say, forcing myself to focus on my customer’s now-radiant face.
Posted by Boon's Bookcase at 12:31