The Punch and Judy Girl
by
Sheila Newberry
Blog Tour 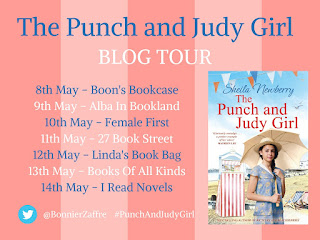 It's my pleasure to be a part of this blog tour today for The Punch and Judy Girl by Sheila Newberry. I have an extract for you below.

May would keep the legend, in memory of her late father, Jim, the popular Punch and Judy man. ‘Professor’ was of course an honorary title, but traditional. Smokey plodded on, sensing journey’s end, after May climbed back into the driving seat. May and her younger sister Pomona had travelled almost twenty miles from their Aunt Min’s home, on the outskirts of Kettle Row, a market town on the borders of Suffolk and Norfolk. Their grandfather had settled with his daughter when he gave up travelling with the show. To Min, who’d been widowed in the Boer War, the Jolleys were her family. Min was responsible for naming her younger niece after Pomona, the Roman goddess of orchards. This was fitting because Min made her living from the apple, pear and plum trees in the smallholding she’d inherited from her in-laws.
Jim and the children stayed on the farm during the winter, when Pomona attended the village school. May’s education had ended at fourteen, so she and Jim spent this time refurbishing the puppets, sewing new costumes, painting fresh backcloths, inventing new props.
Sadly, soon after their return from the last summer season, Jim succumbed to chronic congestion of the lungs. The condition had plagued him since he was gassed in the trenches during the Great War, the one it was said would end all wars. He had been invalided out of the Army in 1916. During his absence, Carmen, his wife, had left May with Min, while she toured with other dancers to entertain the troops. She’d not been best pleased when she was expected to return home to look after her sick husband, and then a new baby in 1917.
Jim’s last words to May were: ‘Will you girls carry on with the show?’ She’d promised him that they would.
May and Pomona were about to fulfill this pledge. Their mother, Carmen, a volatile Spanish flamenco dancer, who’d left most of the girls’ upbringing to their father, had flounced off four summers ago with an itinerant evangelist, after a huge row with Jim right in the middle of the rival entertainments, leaving both audiences gawping on the beach. ‘That’s the way to do it!’ Punch had cried, as the hymn singing faltered and faded. ‘He never liked her,’ Jim muttered to May.

To order a copy of the book click here
Posted by Boon's Bookcase at 07:00