All The Good Things
by
Clare Fisher 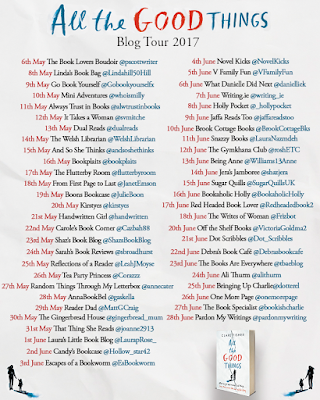 It's my turn today on the Blog Tour for All the Good things by Clare Fisher. I hope you enjoy an extract I have for you.

All the Good Things


1. Smelling a baby’s head right into your heart
2. Running until your body is a good place to be
3. When two people love each other enough to share silence
4. Friends you can be weird with
5. Curling up in a fleece blanket, in your own home
6. Reading out loud to people who listen
7. Flirting on orange wednesday
8. Falling asleep with your legs tangled up in someone else’s
9. When you’re so happy it hurts
10. When your body finally grows up
11. Owning up to bad things you’ve done
12. Telling the truth in club toilets
13. A soft ear in hard times
14. How cats can find sun to lie in, even on a cloudy day
15. Baby bellies
16. When your mum wraps a scarf around your neck
17. Doing the things that scare you most
18. Running as fast as the thames flows
19. Knowing that whatever else changes, you will get up at the same time every day
20. When a baby bites your nipple like it will never let go
21.
22. The promise of a blank page


1. Smelling a baby’s head right into your heart


Writing a list of good things may seem pretty retarded – at least, that’s what I said when Erika brought it up. I didn’t know Erika before they put me in here but now we have to put up with each other for a whole hour every week. She has these geekster glasses that make her eyes look bigger than any person’s should; when I said the word ‘retarded’, they grew so big, it was like she knew everything about me and about the universe and about whatever lay outside the universe, and that made me feel small, and so I jumped up, gripped the back of my chair and said, ‘I’m not a retard.’