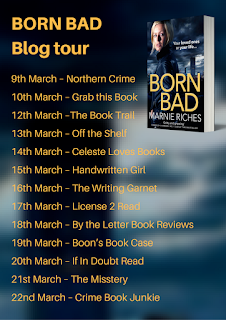 I'm delighted to be a part of this blog tour. I love Marnie's George McKenzie series, so am eager to read this one. I have an extract for you today, but hopefully will have a review for you soon.

Conky pulled Sheila from Gloria as gently as possible, though the two women fought against him with balled fists and venomous slaps.
‘About time too! Get her out of here!’ Sheila said.
‘You’re making a big mistake!’ Gloria shouted. Normally so primly dressed, Conky was surprised by the defined, almost manly musculature of her arms. She was grabbing at Sheila again. Shaking her like a wayward child. ‘I need this final deal to go through. I need money. It’s all right for you.’
But the diminutive Sheila was no pushover. She pummelled Gloria towards the door like a mini-Sumo pushing her opponent to the chalk line. ‘All these years, we worked as business partners and you’re still thinking it’s all right for me? You cheeky, chippy cow! You were my cleaner and I made you rich.’
Gloria halted in her offensive. Stepped back suddenly, her hands in the air, her neck at an awkward, sassy angle. Blinking hard like the Ricki Lake show had never been taken off air. ‘You made me rich? I’m sorry. I cleaned your mess up for the first ten years of your marriage and have all but run your business single handedly. But you. Made me. Rich. You. In your frigging mansion.’ She gasped. ‘Look at that. You made me swear, you terrible woman.’
Sheila poked the taller woman in her chest with a manicured fingernail. ‘You were nothing until we started the agency together. Nowt. An old washed-up scrubber from Sweeney Hall with a Boddlington scumbag for a son.’
Conky sucked the air in between his teeth. Ready to step between the women yet again but privately relishing seeing the feisty side to Sheila come out.
‘Now, come on girls. Don’t be saying anything you’re going to regret tomorrow.’
‘Too late for that,’ Gloria said. ‘There’s no coming back from this. All the things I could say about you, you overindulged, anorexic white cow.’
‘Oh, I’m really losing sleep,’ Sheila said, hand on hip in her satin bathrobe. Sarcasm dripping thickly from every syllable.
‘My future’s ruined, thanks to you!’ Gloria shouted. ‘All because you couldn’t be bothered to do one more lousy job, you heartless hussy. A false witness will not go unpunished. Proverbs 19:5!’
‘Gloria!’ Conky snapped, grabbing her by the upper arm. ‘Time you went home.’ He had only got the gist of the conversation but could see from the tears standing in Gloria’s eyes that things weren’t good for her. He felt a pang of unexpected sympathy.
‘And you think my life’s easy, do you?’ Sheila opened her mouth, as though there was much more to say. But the question simply hung in the air between them – rhetorical and loaded with insinuation. Sheila put her hand over her own mouth. Gathered her robe about her and hugged herself. Spoke in a quiet voice. ‘I’m sorry you feel this way, Gloria, but a promise is a promise. Me and Paddy are packing up and going to Thailand. You want to start your own cleaning company, go ahead. But you can’t have mine. I have the majority share, and Pad says it’s over. All of it.’
Gloria snatched up her handbag. Glared at Conky as though this contretemps were somehow his fault. ‘Fine,’ she said, throwing her coat over her arm. ‘Leave all those women in the lurch. Forget about the likes of little Efe. Forget about me. Forget about your own hopes and dreams. I’ll see you around.’
As the front door slammed shut, Sheila burst into tears. A small woman who suddenly looked like a vulnerable scrap of a girl. Conky put his arm around her tentatively. Stroked her hair, wondering if it would be appropriate to plant a gentle kiss on her head. He decided against it.
‘She’s so tight,’ Sheila said. ‘Calling me a heartless bitch!’ She hiccoughed the words out, beside herself, now. ‘I never thought it would be so hard just to down tools and step away from all this.’
Feeling that she was holding onto him with a little too much vigour and not sure if he could trust himself, Conky ushered her to a bar stool and bade her sit down.
‘I’ll make some tea,’ he said. Started to rifle through the convenience food in the kitchen cupboard; rummaging behind the packets of Smash, the tins of beef stew and Patak’s jars to find what he sought. A packet of chamomile tea he had bought Sheila at a time when she had complained that she wasn’t sleeping. He prepared the infusion in silence, allowing Sheila to process her hurt. She blew her nose heavily on some kitchen roll and took the vodka bottle out of the cupboard.
‘No need for that,’ he said, taking it from her and stowing it away again. ‘It’ll keep you awake all night. Have this hot drink I’ve made you instead.’
He watched with some satisfaction as Sheila sipped from the cup. Her hiccoughs slowed before stopping altogether.
‘What do you want to do?’ he asked her finally.
Sheila shook her head. Looked as if she were about to share her innermost thoughts. Placed her hand on top of his, then thought better of it. ‘I do whatever my Paddy wants me to do. And you need to go home, Conks.’

To order a copy of Born Bad click here