Through The Barricades
by
Denise Deegan
BLOG TOUR
&
GIVEAWAY 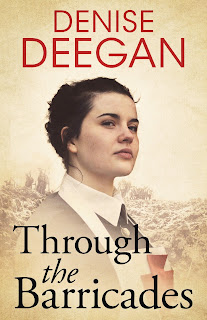 I'm delighted to be hosting the Blog Tour for Through the Barricades by Denise Deegan. The author very kindly sent me a copy of the book after I commented about the lovely cover on Twitter. I love a wartime saga and this one didn't disappoint, even if I kept singing part of a certain song from Spandau Ballet, every time I picked up the book!! I have an extract for you and my review, oh and don't forget the giveaway! Good luck

‘Make a difference in the world,’ are the last words Maggie Gilligan’s father ever says to her. They form a legacy that she carries in her heart, years later when, at the age of fifteen, she tries to better the lives of Dublin’s largely forgotten poor.

‘Don’t go getting distracted, now,’ is what Daniel Healy’s father says to him after seeing him talking to the same Maggie Gilligan. Daniel is more than distracted. He is intrigued. Never has he met anyone as dismissive, argumentative… as downright infuriating.

A dare from Maggie is all it takes. Daniel volunteers at a food kitchen. There, his eyes are opened to the plight of the poor. It is 1913 and Dublin’s striking workers have been locked out of their jobs. Their families are going hungry. Daniel and Maggie do what they can. Soon, however, Maggie realises that the only way to make a difference is to take up arms.

The story of Maggie and Daniel is one of friendship, love, war and revolution, of two people who are prepared to sacrifice their lives: Maggie for her country, Daniel for Maggie. Their mutual sacrifices put them on opposite sides of a revolution. Can their love survive?

Maggie woke coughing. It was dark but there was something other than darkness in the air, something that climbed into her mouth, scratched at her throat and stole her breath. It made her eyes sting and tear. And it made her heart stall. Flames burst through the doorway like dragon breath. Maggie tried to scream but more coughs came, one after the other, after the other. She backed up in the bed, eyes wide, as the blaze began to engulf the room. She thought of her family, asleep in their beds. She had to waken them – with something other than her voice.
She hurried from her bed, peering through flame-lit smoke in search of her jug and washbasin. Reaching them, she flung water in the direction of the fire and began to slam enamel against enamel, fast and loud. She had to back away as flames lapped and roared and licked at her. But she kept on slamming.
Her arms grew tired. Her breath began to fail her. And she felt the heavy pull of sleep. She might have given in had she been alone in the house. But there was her father. There was her mother. There was Tom. And there was David. She could not give up.
Then like a miracle of black shadow, her father burst through the flames, his head tossing and turning. His frenzied gaze met hers.
‘Maggie!’
She began to cry with relief but relief changed to guilt as she realised that she had only drawn him further into the fire.
‘No! You were meant to take the stairs. You were meant to-’
‘It’s all right, Maggie Mae. It’s all right,’ he said, hurrying to her. He scooped her up and held her tight as he carried her away from a heat that burned without touching.
She felt cool air on her back as he opened the window. Wind rushed in, blowing the drapes aside. The flames roared louder, rose higher. But her father only looked out at the night sky. And down.
‘Missus O’Neill! I’m dropping Maggie down to you!’ he called. ‘Catch her now, mind. Catch my little girl.’ Then he looked deep into Maggie’s eyes. ‘Missus O’Neill is down below with her arms out for you. I’m going to drop you down to her.’
‘Will she catch you too?’
But he just smiled and kissed her forehead. ‘Make a difference in the world, Maggie.’
The sadness in his eyes filled her with a new terror. ‘But you’re coming too?’
He smiled once more. ‘I am, as soon as I get the others out. Now keep your eyes on mine, Maggie Mae. Keep your eyes on mine all the way down.’

Maggie and Daniel couldn’t have come from different backgrounds. Daniel comes from a privileged background and is shielded from what is going on in Ireland in early 1900s, but Maggie on the other hand, knows only too well how people are struggling to stay alive. She helps in soup kitchens every day and sees the plight of the homeless and helpless of Dublin.

When Daniel first claps eyes on Maggie, he knows she will always hold a special place in his heart, but Maggie is hot headed, stubborn and even though she feels the same for Daniel as he does for her, she will not let her guard down and always hears her dearly departed Dad’s voice saying "always make a difference".


As Daniel and Maggie get older they see themselves go in different directions and when Daniel is sent away to war, Maggie fights battles of her own with great guts and determination. The pair grow closer and reading the letters they write to one another whilst they are apart are beautiful and endearing.

A beautifully written novel and I hope the author continues to write such thought provoking, descriptive, informative novels that bring a smile to your face and a tear to your eye!

Thank you to the author for sending me a copy and of course JB Johnston of Brook Cottage Books for letting me host this lovely book. 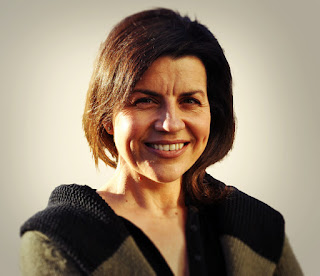 Denise Deegan is author of several best-selling novels for adults and teens. She has been a nurse, a china restorer, a pharmaceutical sales rep, a public relations officer, an entrepreneur and a college lecturer. Her most difficult job was checkout girl, though ultimately this ‘experience’ did inspire a short story…
Denise’s writing for Young Adults includes The Butterfly Novels: And By The Way, And For Your Information and And Actually.
Denise writes women’s fiction as Aimee Alexander including Pause to Rewind, The Accidental Life of Greg Millar and All We Have Lost.
Most recently, Denise has written an historical novel of love and revolution, Through the Barricades.
Denise is represented by the East West Literary Agency and Barry Krost Management. She is a member of the SCBWI.

To win a signed copy of Through the Barricades enter below.