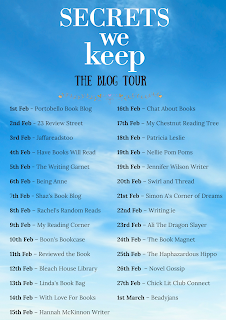 It's my turn to host the Blog Tour for Secrets We Keep by Faith Hogan. Below, I have an extract for you. Enjoy...


Sometimes crossroads appear in the last place you expect Athem. Kate Hunt knew, as the Atlantic winter air dug hungrily into her bones, that she was standing at one now. The beach was empty, save for an occasional reluctant dog walker; certainly, she was the only holidaymaker. Was she a holidaymaker? She was staying with her great-aunt Iris and her husband Archie in their quaint hotel as far away from her real life in London as it was possible to get. Even if it was only an hour by plane to the west of Ireland, Kate felt like she was in a different world. Iris was her only real family now, unless you counted her mother and well, she and Adaline had never been close.
Ballytokeep did not get many tourists outside the summer months; none at all at the end of December. Kate booked the break on Christmas night. It was a whim, she needed to get away, to jump off the treadmill her life had become, just to breathe. Since they met at Pamela’s funeral, Iris sent a Christmas card each year. Just a card. ‘Hope you’re well, thinking of you, love if you had time to pop across,’ it was the kind of thing people said. Probably, you never took them up, but Kate saw it as a sign, a lighthouse in a vast ocean – maybe a place, or people, to call her own. Alone in her London flat, it felt like the whole world was sharing the holidays without her. The city outside twinkled with festive cheer. She convinced herself for so long that it didn’t matter. It was a time for drunks, rows and disappointments and, for almost a decade, she managed to ignore the silly cheerfulness around her. This year, she’d cracked open a bottle of champagne, a  gift from work, had it made her maudlin? Rumour had it; her boss, Lyndon Tansey had just bought a winery in South Africa. He brought in a crate of white and red for their Christmas drinks and they’d all got nicely sozzled. Maybe, Kate thought that Christmas night, as she eyed the half-finished bottle of champagne, maybe that was what had made her feel restless, as though she was missing something. While other people were buying vineyards, she was wading through divorce papers for the rich and famous.
She booked it on a whim. Now, she was pleased she’d come here to this antiquated little place that was too big to be a village, too small to be a town. Ballytokeep, for all the desertion of the summer trade, was a place like no other she had ever been to. It was built on a stony hill, a picture postcard of gaudily painted shopfronts and houses looking down to where the powerful ocean swept up to the weathered promenade. The sea, with its rolling surf whispering slowly and determinedly up the golden sand, seemed to promise the cleaning rejuvenation she so badly craved. Far off in the distance, the towers of a Norman castle keep rose high into the skyline and Kate knew she would visit here again to sit beneath its stoic turret. She loved the little hotel; her room the only one with a guest, peeped out of the centre of the Victorian building. The view was spectacular, small blue and white fishing boats bobbed on the icy waves that beat against the old harbour.
In London, they’d call Hartley’s Guesthouse boutique, shabby-chic or maybe bohemian. If the place was a little faded, its chintz too threadbare to be fashionable, its varnishes dulled with age, it was no less charming for all of that. Here, it was what it was; there was no pretension about the Victorian building with all its original features and impressive views.
On New Year’s Eve they stood looking out across the harbour, just the three of them and toasted the year ahead.
‘To family,’ Archie said and Kate knew she had done the right thing in coming here. The night air was fresh, it seemed that every lighthouse in the distance might wink across the blue-black ocean waves. If Kate could wish for anything, it was that she could have these people close forever. 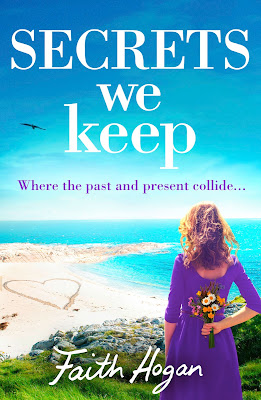