The Museum of You
by
Carys Bray
Blog Tour 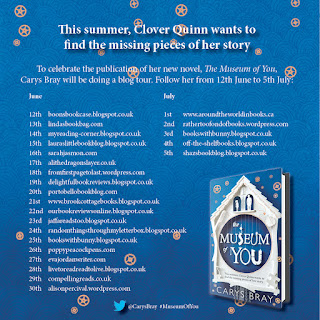 Today, I'm delighted to be kicking off The Museum of You by Carys Bray Blog Tour. I have an excerpt for you and also a character piece on Clover Quinn.

Excerpt
When she got home from the museum Dad was kneeling in the hall. He’d unscrewed the radiator and his thumb was pressed over an unfastened pipe as water gushed around it. The books and clothes and newspapers that used to line the hall had been arranged in small piles on the stairs. Beside him, on the damp carpet, was a metal scraper he’d been using to scuff the paper off the wall.
‘Just in time!’ he said. ‘Fetch a bowl. A small one, so it’ll fit.’
She fetched two and spent the next fifteen minutes running back and forth to the kitchen emptying one bowl as the other filled, Dad calling, ‘Faster! Faster! Keep it up, Speedy Gonzalez!’ His trousers were soaked and his knuckles grazed, but he wasn’t bothered. ‘Occupational hazard,’ he said, as if it wasn’t his day off and plumbing and stripping walls was his actual job.
Once the pipe had emptied he stood up and hopped about for a bit while the feeling came back into his feet. ‘I helped Colin out with something this morning,’ he said. ‘The people whose house we were at had this dado rail thing – it sounds posh, but it’s just a bit of wood, really – right about here.’ He brushed his hand against the wall beside his hip. ‘Underneath it they had stripy wallpaper, but above it they had a different, plain kind. It was dead nice and I thought, we could do that.’
Dad found a scraper for her. The paint came off in flakes, followed by tufts of the thick, textured wallpaper. Underneath, was a layer of soft, brown, backing-paper which Dad sprayed with water from a squirty bottle. When the water had soaked in, they made long scrapes down the wall, top to bottom, leaving the backing paper flopped over the skirting boards like ribbons of skin. It felt like they were undressing the house.
The bare walls weren’t smooth. They were gritty, crumbly in places. As they worked, a dusty smell wafted out of them. It took more than an hour to get from the front door to the wall beside the bottom stair. That’s where Dad uncovered the heart. It was about as big as Clover’s hand, etched on the wall in black, permanent marker, in Dad’s handwriting: Darren + Becky 4ever.
‘I’d forgotten,’ he murmured. And then he pulled his everything face. The face he pulls when Uncle Jim is drunk. The face he pulls when they go shopping in March and the person at the till tries to be helpful by reminding them about Mother’s Day. The face which reminds her that a lot of the time his expression is like a plate of leftovers.
She didn’t say anything, and although she wanted to, she didn’t trace the heart with her fingertips. Instead, she went up to the bathroom and sat on the boxed, pre-lit Christmas tree dad bought in the January sales. When you grow up in the saddest chapter of someone else’s story you’re forever skating on the thin ice of their memories. That’s not to say it’s always sad – there are happy things, too. When she was a baby Dad had a tattoo of her name drawn on his arm in curly, blue writing, and underneath he had a green, four-leaf clover. She has such a brilliant name, chosen by her mother because it has the word LOVE in the middle. That’s not the sort of thing you go around telling people, but it is something you can remember if you need a little boost; an instant access, happiness top-up card – it even works when Luke Barton calls her Margey-rine. Clover thought of her name and counted to 300.
When she went downstairs Dad had recovered his empty face and she couldn’t help asking a question, just a small one.
‘Is there any more writing under the paper?’
‘I don’t think so.’
‘She didn’t do a heart as well?’
‘Help me with this, will you?’
They pulled the soggy ribbons of paper away from the skirting and put them in a bin bag. The house smelled different afterwards. As if some old sadness had leaked out of the walls.

The Museum of You – Meet Clover

Clover Quinn is twelve years old. She likes Doctor Who and knitting. She likes visiting Grandad and Uncle Jim and cycling down to the allotment to water things – that’s her job this summer because, for the first time, she doesn’t have to go next door to Mrs Mackerel’s house while Dad works, driving his bus to Liverpool and back.

Dad isn’t great at explaining things. Clover remembers, years ago, asking where babies come from. ‘Between your legs,’ he said, and afterwards, as she eyed her legs from foot to thigh, she determined that the space between each – the soft, veiny plane of skin behind her knees – was incredible.
Clover knows she was a surprise. She had always imagined that she was the good kind of surprise, like when it’s a party and everyone jumps out and shouts, ‘Happy birthday.’ But she is beginning to wonder whether she was the kind of surprise someone might get if, after the party, they got home and discovered their house had been burgled.
She wants to ask about it. Sometimes the question is there, in her mouth, all the words lined up in the right order: ‘You know the story of when I was born?’ Once or twice the beginning of the ‘Y’ has slipped out like a string of spaghetti and Dad has said, ‘What?’ But each time, she has retreated: ‘Oh, nothing.’ She doesn’t want to upset him or, perhaps worse, lead him to shrug and say, ‘What’s done is done, Clover. Don’t waste time thinking about it.’ But she does, she thinks about it a lot.
This summer, while Dad is driving his bus, window open, right arm resting in the sunlight, she will sneak upstairs and explore the second bedroom which is still full of her mother’s belongings. And she will curate an exhibition that will tell the full story of her mother, her father and who she is going to be. 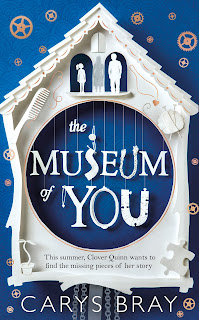 The Museum of You is available from your local bookshop and online.
A moving and surprisingly funny novel – The Independent