One Hot Summer
by
Kat French 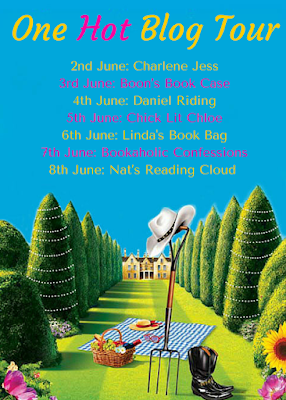 I have loved Kat French’s previous two books and both have been in my top ten, Undertaking Love (2014) and The Piano Man Project (2015), so when I knew that a new book was coming out I just had to get a review copy!

One Hot Summer starts with the break up of Alice McBride and her husband Brad’s marriage and the fall out that entails. Alice is determined to stay in their huge house Borne Manor as she fell in love with it the moment she saw it, but without Brad’s celebrity pay packet to keep them afloat, she decides the only way to keep up the payments on the mortgage is to rent it out.
Robinson Duff is also trying to mend a broken heart and wants to get away from Nashville and the Country music scene where he is a huge star and take some time out where nobody will bother him. Borne Manor seems to be that very place and he puts a six month payment down on the country retreat.

Alice decides to live in a caravan (Airstream) in the vast grounds of the Manor whilst Robinson lives in the house. She has dreams of setting up a glamping business to keep things afloat while her lodger lives in luxury in Borne Manor.
When Alice meets a jetlagged Robinson for the first time, there is a definite spark there, but Alice is still hurting from her marriage break up. Will Robinson be able to charm her with his American charm?

Alice has some weird and wacky neighbours living in the cottages on the outskirts of the Manor and some of their antics (including a cursing mina bird) had me in absolute hysterics! My son can’t believe I actually laugh out loud at a book!

Another brilliant book from Kat French and I know already that this one is going to be in my 2016 top ten! I can guarantee that it will get you  sprinting for your country music CDs! I had my Garth Brooks one on full blast whilst having visions of Kevin Costner in a Stetson like in The Bodyguard!!

Loved it! Roll on the next one!