Also a Guest Post by the author on how George McKenzie has grown over the 3 books! 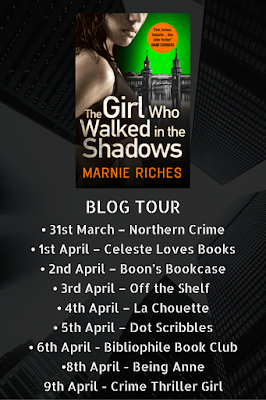 The third edge-of-your-seat thriller in the Georgina MacKenzie series. Fans of Stieg Larsson and Jo Nesbo won’t be able to put it down!
Europe is in the grip of an extreme Arctic blast and at the mercy of a killer, who leaves no trace. His weapons of choice are razor-sharp icicles. This is Jack Frost.
Now a fully qualified criminologist, Georgina McKenzie is called upon by the Dutch police to profile this cunning and brutal murderer. Are they looking for a hit man or a frenzied serial-killer? Could there be a link to a cold missing persons’ case that George had worked with Chief Inspector Paul van den Bergen – two abducted toddlers he could never quite give up on?
The hunt for Jack Frost sparks a dangerous, heart-rending journey through the toughest neighbourhoods in Europe, where refugees and Roma gypsies scratch a living on the edge of society. Walking into the dark, violent world of a trans-national trafficking ring, can George outrun death to shed light on two terrible mysteries?


George is back with a bang!

Having become a criminologist, George is keeping busy trying not to think of her on-off relationship with Chief Inspector Paul Van Den Bergen, when out of the blue she gets a text from him asking her to get to Amsterdam..........quickly!

Europe is in the grip of an extremely cold period and there is a killer on the loose nicknamed Jack Frost. It soon becomes apparent that they are dealing with something big when two small children disappear from their garden without trace. Are these connected? Child trafficking is big business in Europe, especially amongst the Roma people, so it is up to George and Paul to fish them out and to find little Lucy and Josh, before it's too late........

Meanwhile, George is having personal issues of her own, including her mother Letitia, who has plonked herself on her Auntie Sharon's sofa, with no intention of going anywhere, claiming she is dying! This book sees George a bit more exposed personally, as her family are put at risk and have to escape the country immediately as an old acquaintance rears his ugly head and threatens them all.

In this third book, I feel we see a softer side to George as she tries to protect her family, whilst trying to stay professional and keep her feelings for VDB under control. It doesn't always work, but George certainly gives it all she's got!

I do hope we hear more from George. I really feel we are getting to know the real person behind the "mask" and also I need to find out what happens between her and VDB!

There were a lot of characters in this book, but with the crimes they were having to deal with, I felt it was necessary to the plot.

I really don't know how the author knows about all the places in Amsterdam and can only guess that a huge amount of research is involved, but I love reading about George's family in South East London, as that's where i'm from!!

Well done for yet another fabulous instalment in the George McKenzie series, here's to the next one!!


I just want to say a huge thank you to Marnie Riches who has mentioned me in the acknowledgements for this book. I am truly grateful and very humble, as it is an absolute pleasure to read these books and I really do look forward to the next one! 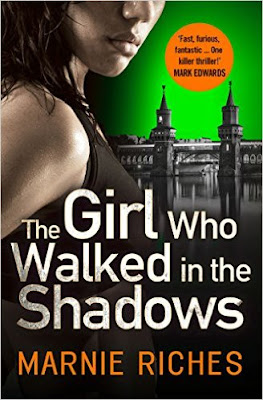 How George has grown!
Guest post from Marnie Riches

George McKenzie – From teen to crime-busting machine inside 12 months.

Over the course of the first three George McKenzie novels, young Georgina has had an awful lot of growing up to do. Why? Well, in The Girl Who Wouldn’t Die, she crashed into readers’ lives as a feisty student, studying at Amsterdam University during an Erasmus year towards the end of her Cambridge University Human, Social & Political Science degree. I had written the book back in 2009 at a time when I was mainly penning middle grade and YA fiction. Although I was determined to write a classic Scandi- or Euro-noir crime thriller in the style of Jo Nesbo or Stieg Larsson, it had never occurred to me to make George any older than nineteen or twenty. I wanted to depict my heroine at that time in her life when everything was possible – no day job, no real routine, no husband, no parents, no backache or children to get up for in the morning. In truth, back in 2009, I was gunning for a character who would tip her hat to Lisbeth Salander. But then George McKenzie was born and she was no carbon copy of Salander. From day one, she took on a life very much of her own…

In The Girl Who Wouldn’t Die, I wanted to explore how young women can be exploited by older men in positions of power. George’s relationship with her hated tutor, Vim Fennemans illustrates this ruinous dynamic perfectly, as he continually seeks to threaten and undermine her. But a confident woman like George is always going to give good as she gets. At twenty, it makes sense that she should be scornful of authority, seeking to flout and subvert it at every turn. That’s what young people need to do to make their mark in the world of adults.

In the second book, The Girl Who Broke the Rules, George is four years older and wiser. Though the story is about the hunt for a brutal killer who is leaving a trail of eviscerated sex workers in Amsterdam’s red light district, much of the book focuses on George’s relationships with the older characters in her life – her Aunty Sharon, Van den Bergen, her supervisor, Sally Wright… Rather than kicking against their authority, she negotiates her relationships with them skilfully, proving her maturity. No longer an undergraduate but working towards her PhD, she is now conducting studies within high security prisons into sex offenders, holding her own with the dangerous and deadly Silas Holm. In her personal life, she must decide whether to keep on with her long-distance college romance or to cut her losses and be brave enough to start again with the man she really loves. In this second book, we see a more cynical George, worn down by work and money trouble. And yet, she is stronger than ever. Strong enough to fight for what she wants. Strong enough to mend fences a little with her mother whom she vowed never to see again.

It is in The Girl Who Walked in the Shadows, however, that George has undeniably changed from a girl into a grown woman. She now has a doctorate in criminology, and although it is still very early on in her career, she has all the responsibilities of a professional – financial worries, exacerbated by her having to live between Cambridge, London and Amsterdam; professional petty jealousies and competition amongst academics; love woes; family strife. Throw a little serial murder, a freak cold snap and two missing toddlers into the equation and you have a world that is instantly recognisable to most women and yet far, far removed from readers’ safe normality. It is not until this third book, where George has aged by some six years, that she has the wisdom and inner strength to live through the various trials and dangers that the story throws in her path. She is more able to control her temper. More willing to give people the benefit of the doubt. Tougher than ever mentally – enough to endure any challenge. In short, George has grown up. Though each book is a standalone story, it was inevitable that a series like this would feature a journey that our Girl must make from youth to womanhood.